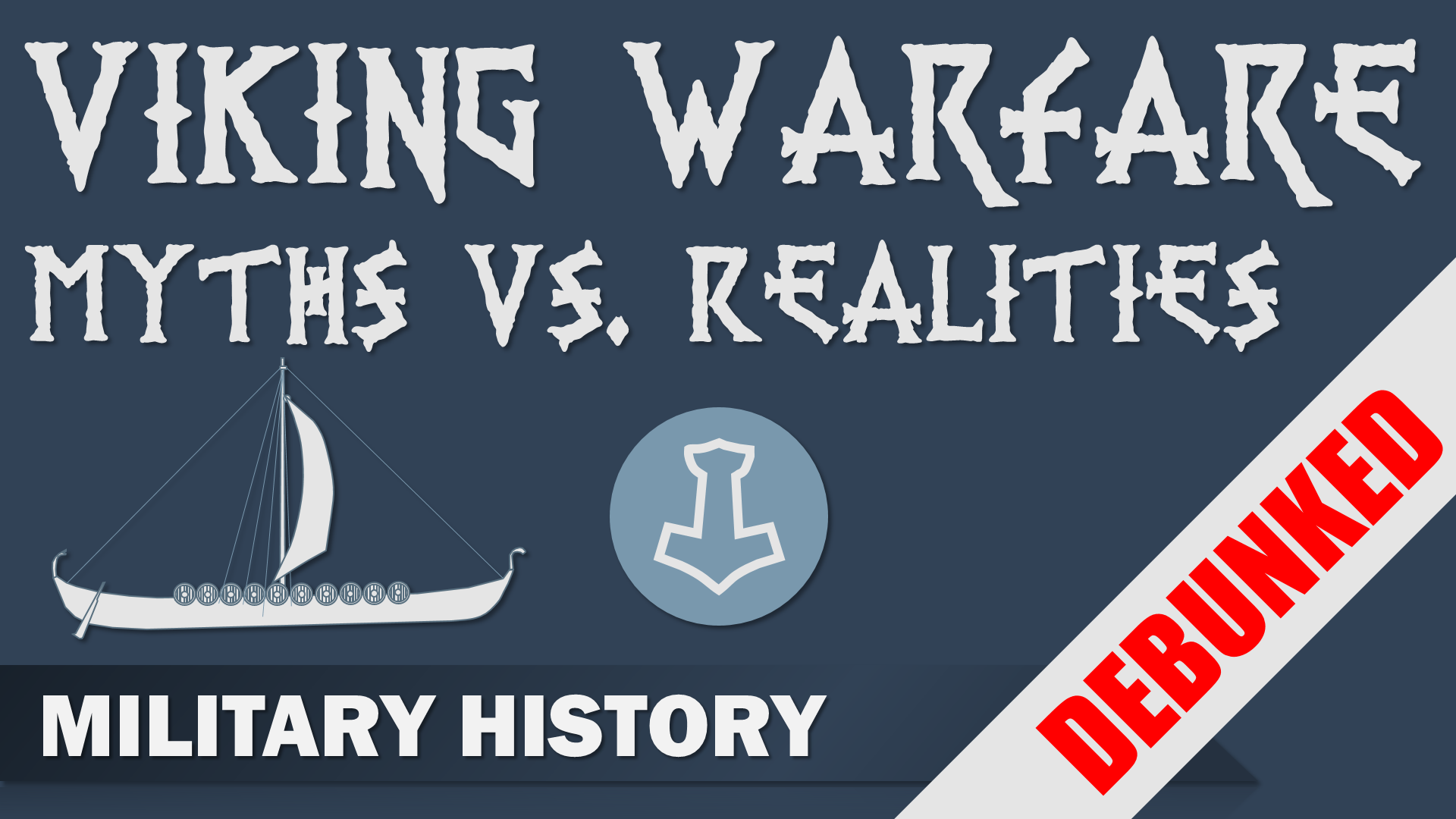 Vikings are often portrayed as fierce warrior savages that pillaged and plundered through Europe that were mostly undefeated. Well, according to recent research most of it is wrong or not really distinctive for the Vikings. So, basically a lot of information is wrong what seems to be common knowledge about the Vikings and I am not talking about superficial stuff like horned Helmets here.
This video is based on the article: Williams, Gareth: Raiding and Warfare; in: Brink, Stefan: The Viking World (See Desription)

First off, Vikings are not an ethnicity, being a Viking is or better was an occupation, like being a Heavy Metal Musician or University Professor. It is derived from the Old Norse word “víkingr”, which means basically raider or pirate. Yet, the term is also used more openly even among scholars, to quote the historian Gareth Williams “although trading, crafts, seafaring and settlement and many other aspects of Viking society may be equally important, it is the raiding which gives us the concept of a Viking Age.” (Williams, Gareth: Raiding and Warfare; in: The Viking World (ed. Brink, Stefan); p. 193)

Now, if anyone tells you why the Vikings started their early raids well, that is cute, because the current state of research is we don’t really know and furthermore we also can’t agree. Although there is a consensus on the later raids and they were primarily motivated by desire to gain wealth, when they were directed against Western Europe, whereas the motivations within internal raids in Scandinavia were motivated by politics. (Williams, Gareth: Raiding and Warfare; in: The Viking World (ed. Brink, Stefan); p. 193-194)

Myths and their Origins

So let’s take a look at the common myths. First off, these myths and portrayals were influenced by various factors. Since the Vikings plundered various monasteries and those were the leading centers of literacy in the Middle Ages, History in that case was written mostly by the losers. In contrast the Viking culture was mostly a non-literate culture, they had an alphabet but only produced a very limited amount of written documents and those that survived were usually created after Christianity already had a major influence on culture. As if those monks were not bad enough, there were the usual misinterpretations and also glorification later. And as we all know, if you cross a Husky with a rat often enough you get a Chihuahua. (Williams, Gareth: Raiding and Warfare; in: The Viking World (ed. Brink, Stefan) & https://en.wikipedia.org/wiki/Vikings#Literature_and_language )

Anyway, let’s combine some common views and myths about the Vikings into one statement: Vikings were fierce undefeated and brutal warriors that lusted for battle, who pillaged and plundered through the peaceful Christian coastal areas of Western Europe like a gang of hoodlums and committed unspeakable atrocities.
Time to examine the various parts of this little sentence.

Did the Vikings pillaged and plundered coastal areas. Yes, they did and since there were over achievers, they did even more. They also attacked mostly landlocked targets like Paris by using their superior ships that had a great deal of carrying capacity and could also travel in relatively shallow water. (Williams, Gareth: Raiding and Warfare; in: The Viking World (ed. Brink, Stefan); p. 197)

Yet, these areas were definitely not peaceful, there was regular warfare between the many kingdoms throughout that era. Nor were the Vikings the only ones that attacked Christian monasteries or churches, attacks from Christian weren’t unknown at that time. (Williams, Gareth: Raiding and Warfare; in: The Viking World (ed. Brink, Stefan); p. 195-196)
This also brings us to the next part the brutality and atrocities.

“brutal warriors that lusted for battle … and committed unspeakable atrocities.”

One of the common brutality cited is the so called blood-eagle, which allegedly was the cutting up of rips and pulling out the lungs of the victim, but there are very few accounts of it and those do not appear in contemporary sources, hence many scholars argue that it was a literary invention, misinterpretation or exaggeration. (https://en.wikipedia.org/wiki/Blood_eagle#Authenticity & (Williams, Gareth: Raiding and Warfare; in: The Viking World (ed. Brink, Stefan); p. 196)

But this doesn’t mean that the Vikings were a bunch of nice guys that politely knocked on your door and asked you if they can talk to you about the Savior of Mankind Thor the Thunder God, but historical behavior needs always be taken into context. Thus, brutality in the Middle Ages can’t be measured by modern standards, but what was common at that era and there is little indication that the Vikings were much more brutal than Christian at that time. (Williams, Gareth: Raiding and Warfare; in: The Viking World (ed. Brink, Stefan); p. 196)

Although Vikings are usually portrayed as fierce warriors, they are also often portrayed more like a gang than an organized war party or military force. Yet, there are many indications that they were well organized. They had a strategy, which had a strong focus on mobility, logistics and recon that allowed them to attack targets by surprise and leave before the enemy could react. Furthermore, it is noted that they avoided battle unless they were confident to win. There is a technical for this, it is called smart. (Williams, Gareth: Raiding and Warfare; in: The Viking World (ed. Brink, Stefan); p. 195-197)

Mobility was a crucial part of Viking raiding campaigns. They achieved this by using their ships, but also horses. These horses were mainly used for transport and usually not during combat, thus they acted as mounted infantry and not as cavalry. It is known that Vikings sometimes attacked from land and sea together, for instance at Exeter in 876. Here they deployed a party that would attack from a land route and meet up with the seafaring party, this freed the land party from carrying around supplies and thus allowed them to move faster. (Williams, Gareth: Raiding and Warfare; in: The Viking World (ed. Brink, Stefan); p. 197)

On the logistical side the Vikings were quite sophisticated, their original raids were small and seasonal, but later on they performed large-scale raids and even performed them during winter. Considering that land wars by leading kingdoms in that era were usually not conducted during winter, this should give you an indication on how well the Vikings were able to manage their supplies. They achieved this feat by taking over monasteries, towns and other places early in winter. Thus, these places were already filled with supplies. Additionally, for the invaded kingdom it was difficult to raise and supply an army during that time of the year, thus counter attacks were unlikely. Williams view on this is particular interesting:
“When even major kingdoms struggled to maintain permanent field armies, the fact that the Vikings managed to campaign for years on end, often in hostile territory, is perhaps a more impressive achievement than any success they may have enjoyed on the battlefield.” (Williams, Gareth: Raiding and Warfare; in: The Viking World (ed. Brink, Stefan); p. 198)
Which means that any portrayal of Vikings as a disorganized force that acted without thought or careful planning is even less valid as my claim to the crown of Prussia. Which brings us to the final part of the statement:

“were fierce undefeated and brutal warriors that lusted for battle”

The Vikings being fierce and undefeated warriors. It is without question that the Vikings were formidable foes, especially since we know that they were smart and well-organized, which is a crucial element for conducting effective military operations. Nevertheless, they also suffered notable defeats besides their notable victories and thus were far from undefeated.

To conclude, let’s revise what is left of our original myth sentence:
“Vikings were fierce undefeated and brutal warriors that lusted for battle, which pillaged and plundered through the peaceful Christian coastal areas of Western Europe like a gang of hoodlums and committed unspeakable atrocities.”
And the reality was probably a bit closer to the following statement:
“Vikings were fierce and organized warriors that attacked selected targets in coastal areas and near large rivers due to superior strategic mobility. Their grasp of logistics allowed them to perform raids even during winter, which was very uncommon at that time, unlike the raids itself and the committed violence, which were common occurrence in that time period among Christian kingdoms.”
How they were stopped from Raiding?
So, since we tackled the myths, one question remains, how could the Vikings stopped from raiding?
As mentioned before Viking Raids relied heavily on mobility and supplies, thus denying them both was a viable defensive measure. This was achieved by building fortified bridges that denied them access to the various rivers that were vital for their raids. Additionally, fortified towns on the coasts allowed the defenders to hold out longer and also serve as supply bases for defending armies. (Williams, Gareth: Raiding and Warfare; in: The Viking World (ed. Brink, Stefan); p. 198-199)

And finally, it should be noted that Viking battle techniques and weapons were actually quite similar to that of their foes. The most distinctive feature of the Vikings was their emphasis of ships, strategic mobility and logistics, which allowed them to outmaneuver their enemies before they could properly react. Thus, the main difference between Viking Warfare and that of their foes was on the strategic not the tactical level. And we all know it is more comforting for the ego to state that one was overwhelmed by brutality rather than to admit that one was outsmarted by so called Savages.

Now, if you are interested in Vikings I have two recommendations for you, first the book Viking World from 2011 with more than 700 pages, it is full of scholarly articles about everything concerning the Vikings, I only read a few articles but those were excellent.
And second an album trilogy from the German Heavy Metal Band Rebellion, which contains some of my favorite songs, most notably Ruling the Waves and God of Thunder, see the links to videos and amazon in the description.

Special thanks to Peter Rempel for providing the font PR Viking for more information and other fonts check out his page here: Peter Rempel Fonts