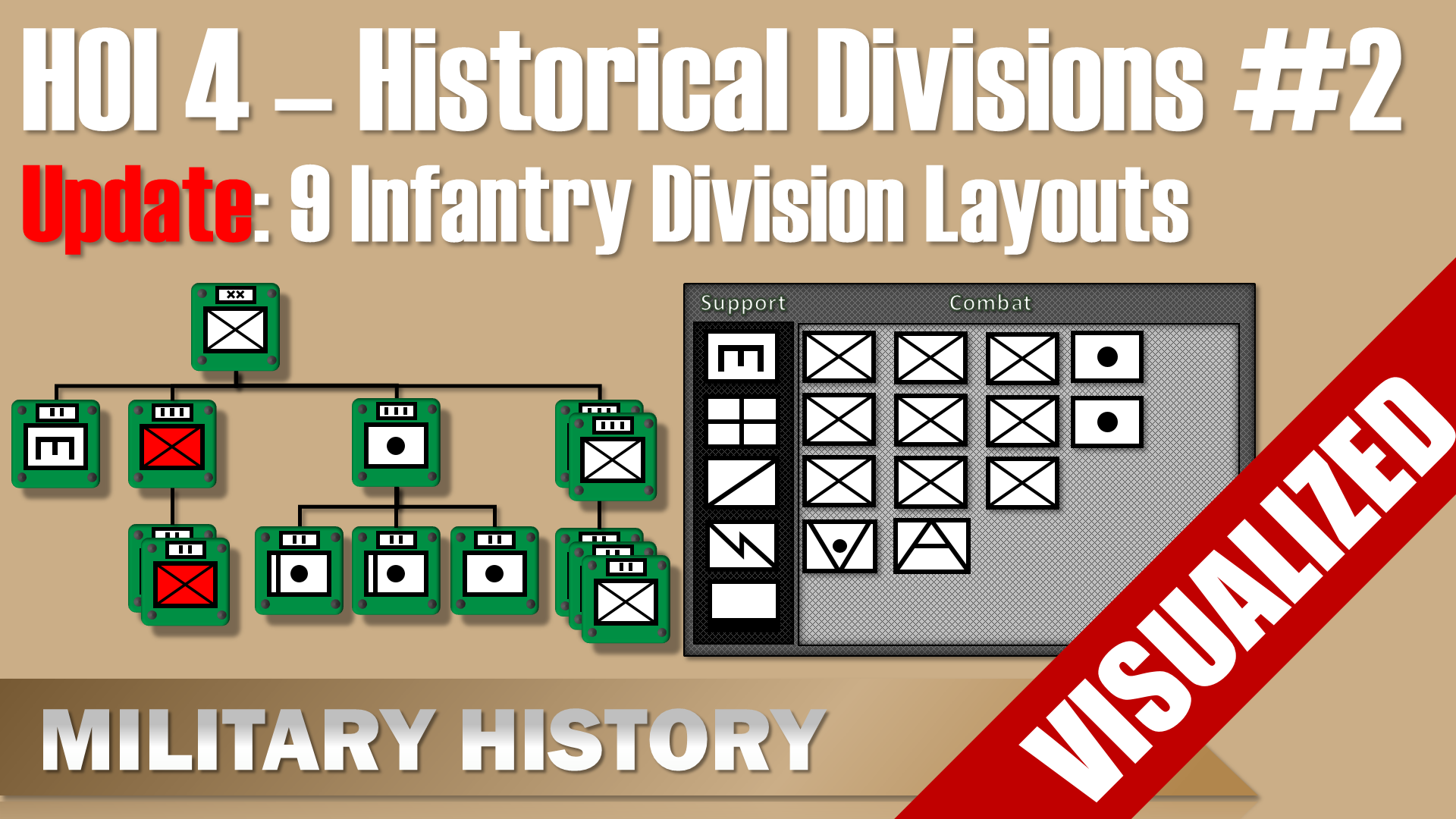 Since my first historical division layout video was a major success and a lot of people asked for more, I will do more, but first I have to address the errors in my original layouts, so here is a short update were I discuss the errors, some community contributions and of course the updated layouts briefly.

First, thank you all for the great feedback, especially on the paradox forums. Now, there are two people I want to mention explicitly:
First, the steam user ramadawn, who created a mod with various historical divisions, which is also available on the steam workshop.
Second, the paradox user elfiwolfe for giving a lot of good feedback and creating a wiki page with divisions that are derived from my layouts with additional ingame values.
In both cases I didn’t have time to check them out thoroughly, but from their conduct, comments and the data I looked at, I have a good initial impression.

Errors in my first video

Now, when I did my first video I missed a few things that lead to several errors, most notably:
1) Initially, I wasn’t sure if the Artillery Battalions ingame were actually artillery regiments or not.
2) I missed that the support units have less equipment and guns than their equivalent regular combat units.
3) I assigned far too small numbers of anti-tank units in the original video.
The first part, the ingame artillery battalions are actually 3 historical artillery battalions, additionally the game files calls them artillery brigade. Whereas a historical artillery battalion had 12 guns the ingame has 36. For this reason the number of artillery units in my original videos were way too high.
Second, I missed that the number of guns in the support units for anti-tank, artillery, and anti-aircraft is less than that of the regular combat battalions. Basically, a regular combat unit has 50 % more guns than the support version. This allows a bit more fine-tuning, but also note that the support units have special characteristics ingame that I won’t cover here.

Third, in my original video I was far too strict on the anti-tank units. For some reason I neglected the ingame number of guns and used the German Infantry division as reference, whereas in this video I will set the ingame numbers in direct reference to the historical numbers.

Since I covered the historical division setups in the original video, I will not narrate the whole setup again, so if you are interested in the background and haven’t see the original video you might want to check it out beforehand, it is mostly military history.

Note that these units are optimized historical accuracy and not gameplay.

Now, since the historical unit had 48 artillery guns, an alternative setup would be to use no regular artillery unit, but two support artillery units, this would give the correct amount of artillery pieces for this unit. 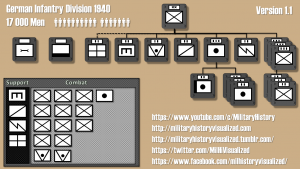 Since, we covered fifty shades of grey, time to take a look at Big Red, well no that is too scary, so let’s go with the Soviet Rifle Division from April 1941 instead.
Based on the data, I propose the following changes:
Reduce the number of artillery battalions to 1 or 2 units. Since, the division had 54 anti-tank guns and my original proposal had a regular anti-tank battalion included, one could add an additional support anti-tank unit. This would bring up the total ingame number of 60 guns, which slightly above that of the historical numbers. 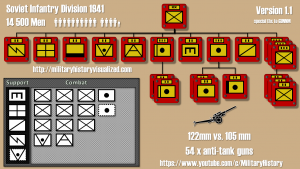 Yeah, well, the Fourth of July is over, but freedom never ends, so next is the US Army Infantry division layout from July 1943.
The changes are very similar to the German and Soviet unit. Reduction of the artillery units to just 1 artillery battalion. Then adding a regular anti-tank unit and also an optional support anti-tank unit, since the historical division had a total of 57 anti-tank guns, thus just being short 3 guns to be on point. Also similar to the German division, it had 48 artillery guns, so an alternative setup could be no regular artillery unit, but two support artillery units, to get the same amount of artillery pieces as the original division layout.

Source: Stanton, Shelby: Order of Battle of the US Army in World War II 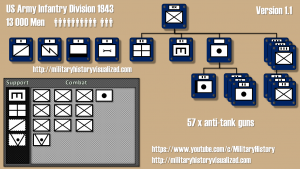 Now, if you like to call things Spandau, here we go, the British Infantry Division in 1939 of the British Expeditionary Force.

The changed layout for the British is as follows:
I would add an anti-tank battalion and maybe an anti-tank support unit, although the real division had only 48 anti-tank guns, it had a large amount of anti-tank rifles. Also only one artillery battalion. The rest stays the same.

Source: http://web.archive.org/web/20150702060849/http://usacac.army.mil/cac2/CGSC/CARL/nafziger/939BXIA.pdf (Note: that it lists 147 pieces of the 25mm anti-tank gun, a number that seems completely off and likely is, because it was a French anti-tank gun and I doubt they received so many of them. https://en.wikipedia.org/wiki/25_mm_Hotchkiss_anti-tank_gun ) 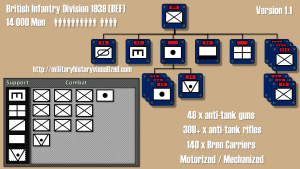 Now the war situation may still not necessarily develop to your advantage, nevertheless here is the update for the Japanese Infantry division Standard B around 1940.
The changed layout for the Rising Sun is as follows:
No regular artillery battalion, because of the very limited amount of firepower provided by the Japanese. At most one artillery support unit should be added.
(Source: Rottmann, Gordon: Japanese Army in World War II – Conquest of the Pacific 1941-1942) 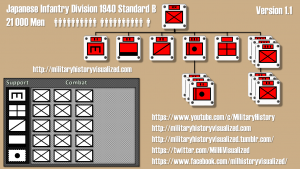 In case you want to go full duce, here is the changed layout for one of the most dangerous pizza delivery services in history, the Italian Infantry division from 1940:
I would make the optional anti-tank support unit a definite one, since the original division had 24 anti-tank guns, which is exactly the number of the ingame unit. No regular artillery unit, but one support artillery unit, although the historical unit had 36 artillery guns those had limited firepower. (12 guns with 100mm and 24 with 75mm, thus of rather weak firepower.)
Source: Schreiber, Gerhard: S.56-62, in Deutsche Reich und der Zweite Weltkrieg, Band 3;
Soruce: Handbook on the Italian Military Forces, August 1943, Military Intelligence Service – TME 30-420 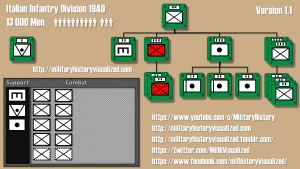 What is faster than a pizza delivery, well, some argue it is the United Baguette Division, so, let’s look at the changes for the French Infantry division of 1940:

There should be a reduction of the regular artillery battalions to just one. Instead of the support anti-tank unit a regular anti-tank battalion and optional an additional one as support, similar to the US and Soviet division, because the French division had 58 anti-tank guns historically. 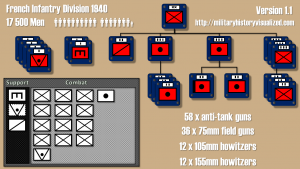 Now, of course this is for Hearts of Iron IV and not Space Invaders, nevertheless, some update on the Polish Space Division is necessary, the changes for the Polish infantry division of 1939, is as follows:
The once optional support anti-tank unit is now definitely a part of the division, because the historical division had 27 guns. Since the historical artillery was quite similar to that of the Italian division, no regular artillery battalion neither, just one support artillery unit. 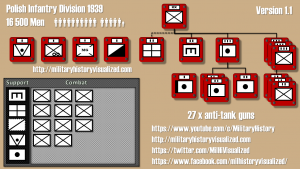 And the last division layout for this video, the setup of the Romanian Infantry Division of 1941.
Now, the updated Vampire Legions are as follows:
The historical division had 30 anti-tank guns, hence either a regular anti-tank battalion or support anti-tank unit are possible. The artillery battalions should be reduced to one support artillery battalion, since their firepower is just a bit more than that of the Polish or Italian divisions. (36 field guns with 75mm and 16 howitzers with 100mm present. ) 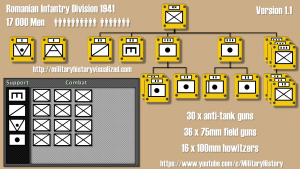 Now, once I realized that the ingame artillery battalions are actually the size of 3 historical artillery battalions, I added a suggestion to the Paradox Forums. Maybe there is a good reason for this, but I haven’t found one so far. Because, well there are enough slots in the division designer to support very large units. Additionally, the other battalions have mostly correct values for manpower and equipment numbers that are on par with historical numbers.
If you think the same or otherwise, please check the link below to my suggestion post on the forums and add your thoughts and/or support there. 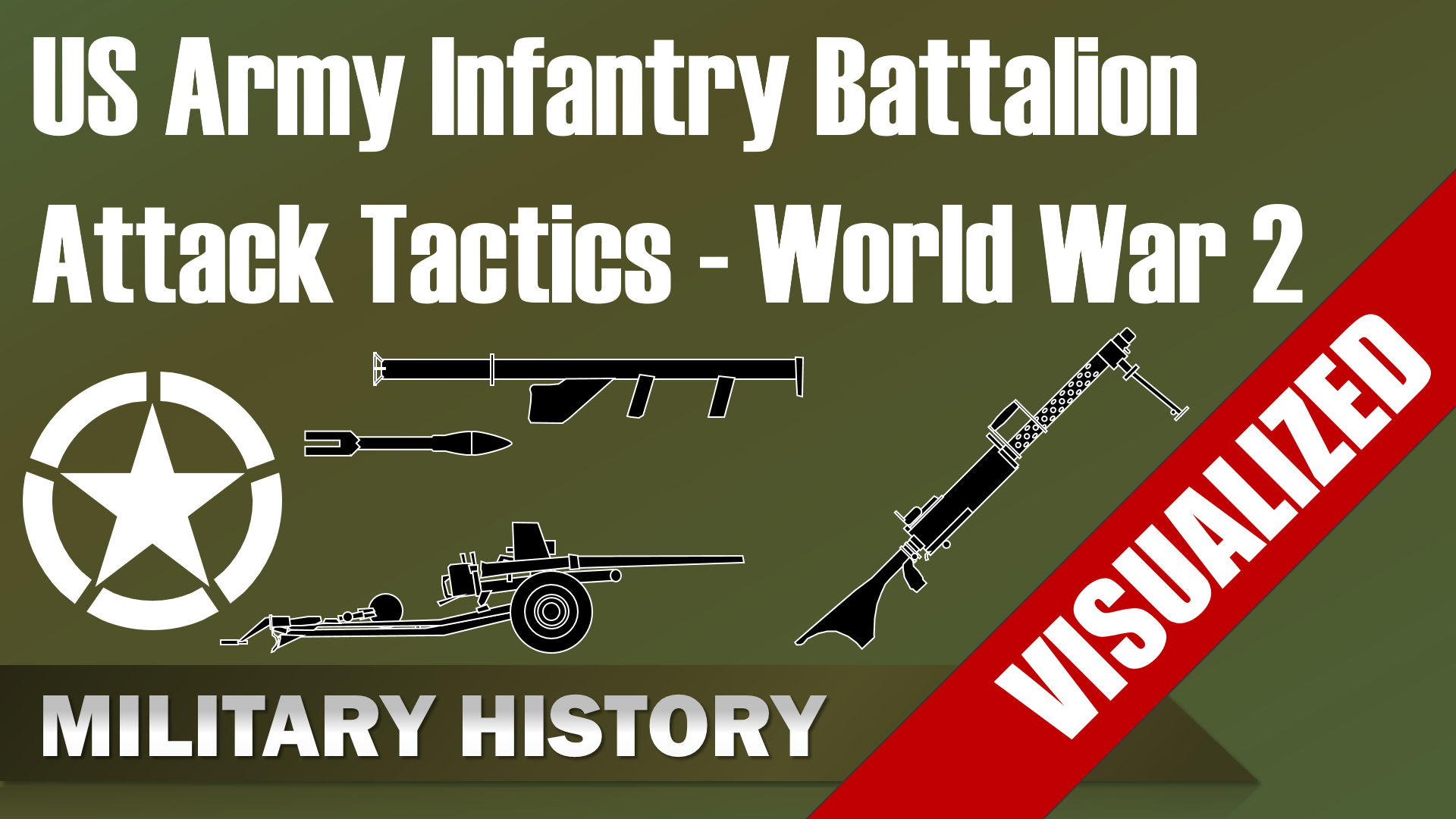