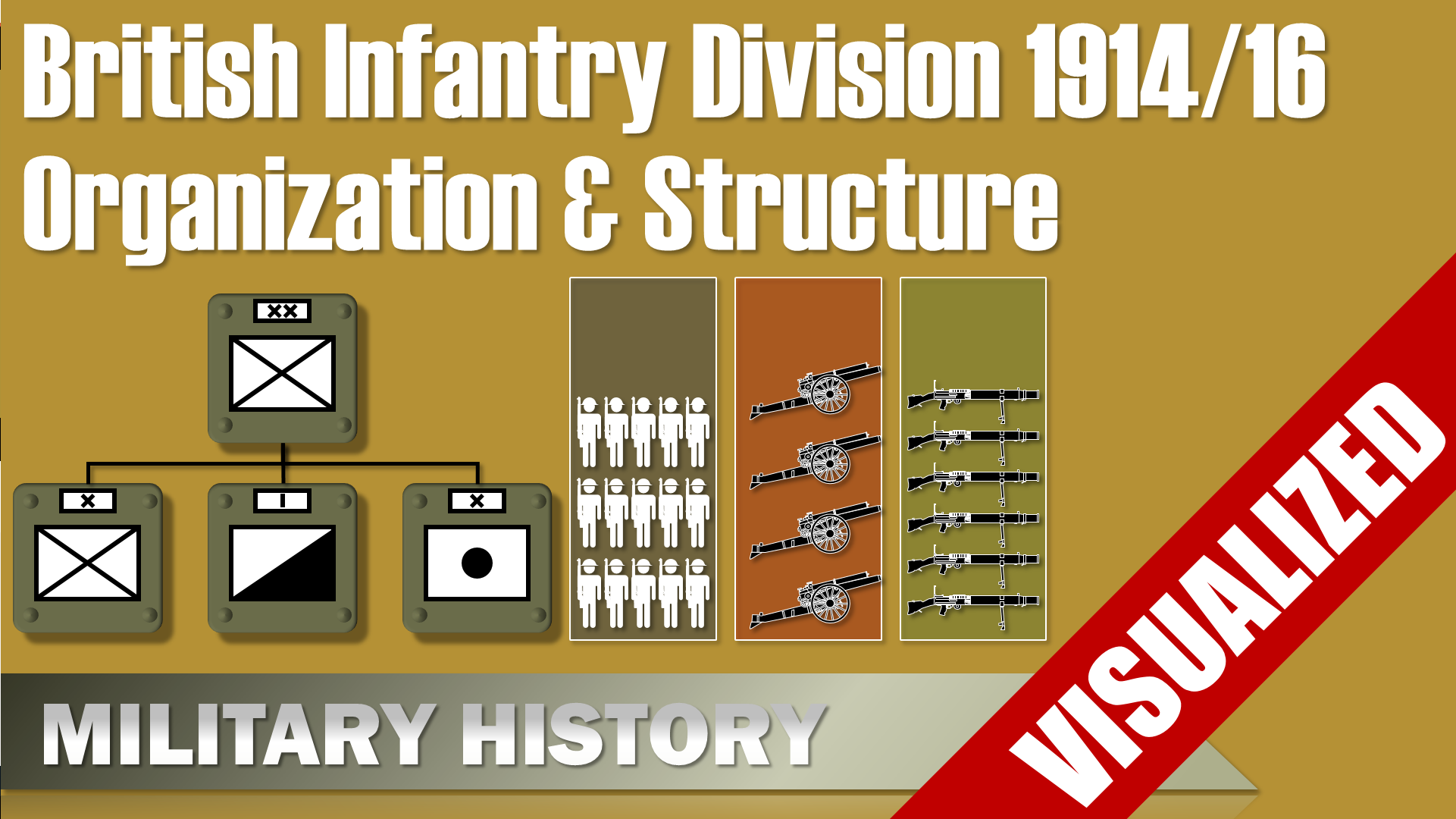 Now in terms of organization and structure, the division in 1914 consisted of 3 Infantry brigades, which themselves consisted of 4 Infantry battalions each, which consisted of themselves of 4 rifle companies and 1 MG Section each. Furthermore, the division had one cavalry squadron for recon, one signal company, 3 field ambulances, 2 Field Companies of Royal Engineers, 3 Brigades of the Royal Field Artillery each with 3 Batteries, one Brigade of Field Artillery with 3 Howitzer Batteries and finally one Heavy Battery of the Royal Garrison Artillery.

Each rifle company consisted of 227 Men and in total there were 48 Infantry Companies, which means that almost 11000 (10896) men of the 18100 (18073) served in the Rifle Companies. Similar to the number of artillery pieces in a German Infantry Division from 1914, the number infantry companies was also 48. Yet, a German company had 270 men. Although the total number of men in both division layouts was almost exactly the same, the German division had an additional 2000 men more serving in infantry companies than the British.

During the war there were many reorganizations in terms of the division layout. Let’s take a look at original 1914 layout and see what had changed til September 1916. The cavalry squadron, the MG section and the Royal Garrison Artillery Battery had been removed. Meanwhile one additional Engineer Company was added, furthermore, each infantry brigade had now one MG Company and one Light Mortar Battery attached. Additionally, there was one Battalion of Pioneers, 3 Batteries of Medium Mortars and one Battery of Heavy Mortars added. Which is similar to the German developments that also increased the number of machine guns and added mortars to their infantry divisions.

Now, take all these values with a grain of salt, because usually every division was a bit different even without considering combat losses. Furthermore, I combined several different sources here and the author of my main source notes the following: “However, the number of discrepancies among the sources is amazing; even two official history volumes give different numbers for a Regular infantry division in 1914.” (-Richard A. Rinaldi: Order of Battle of the British Army 1914, p. 432)

Richard A. Rinaldi: Order of Battle of the British Army 1914 (amazon.com affiliate link) 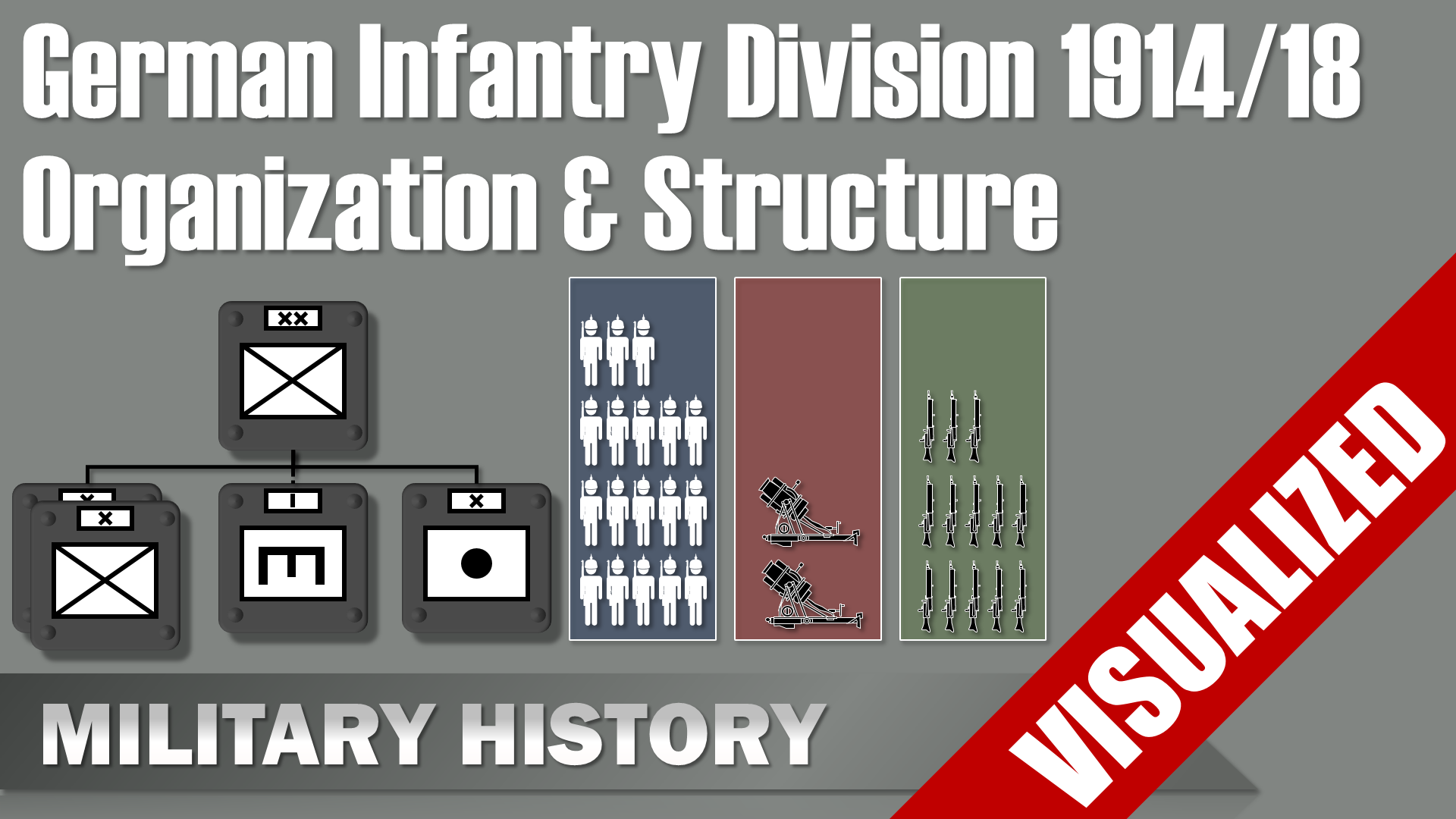 This Layout was soon changed for various reasons. One was to get a more uniform structure, the structure of 2 subunits levels was replaced with a structure of 3 sub-units. This structure of 3 was still the determining in World War 2 infantry divisions. (Note that changing this structure didn’t necessarily lead to a change in total men or equipment, for instance the numbers of guns for a battery was changed from 6 to 4. (S. 123-124))

Changes during the War

There were many other changes throughout the war concerning the division layout, some were to deal with the change in necessities of the war and others about strategy. To note a few changes, there was the addition of a permanent medical company in 1916 and the increase engineer companies throughout the war. But probably the greatest change was in terms of equipment.

To give you a short impression on how much an early-war Infantry Division was different from a late-war Infantry division, let’s revisit the initial numbers and compare them to a division that was intended for offensive operations in 1918, the so called “Mob-Division” or “Angriffsdivision”.

The early war division had around 18000 men, whereas the late war had 15000 to 16000 men, note that the second number is an estimate by an expert on this topic.
In terms of horses there was a decrease from 4600 to 4300, since the attack divisions received more horses than regular divisions the number of horses in overall decreased to greater extent than this display might suggest.

In terms of light machine guns there was an increase from 0 to 180.

Furthermore, the number of heavy machine guns also increased from 24 to 108.

Whereas in terms of light field guns the number of 72 was halved to 36.

Yet, there was a significant change in other artillery weapons, whereas the early war division relied solely on light field guns the 1918 division had: 12 heavy artillery guns, 18 light mine launchers and 6 medium mine launchers. Note that the mine launcher in German is called “Minenwerfer” meaning literally “mine thrower”, which is the old German name for a mortar.
(Source: Stachelbeck: Deutschland Heer und Marine im Ersten Weltkrieg (S. 120) – amazon.de affiliate link)

End Note – Visualization of the men to machine gun ratio

As you can clearly see, the number of machine guns increased substantially by more than 10 times from 24 to 288 machine guns, thus several times multiplying the amount of firepower of the division.

To illustrate in 1914 there was one machine gun for every 750 men. Whereas in 1918 there was a machine gun for every 56 men.
The number of artillery pieces in total didn’t change and stayed at 72, but the number of types was increased and thus resulted in a far more versatile artillery force. The heavy artillery provided more firepower and the mortars allowed for short range indirect fire in close coordination with the infantry, thus the overall flexibility and effectiveness of the division was increased without increasing the total number of artillery pieces itself.

Artillery of the Great War