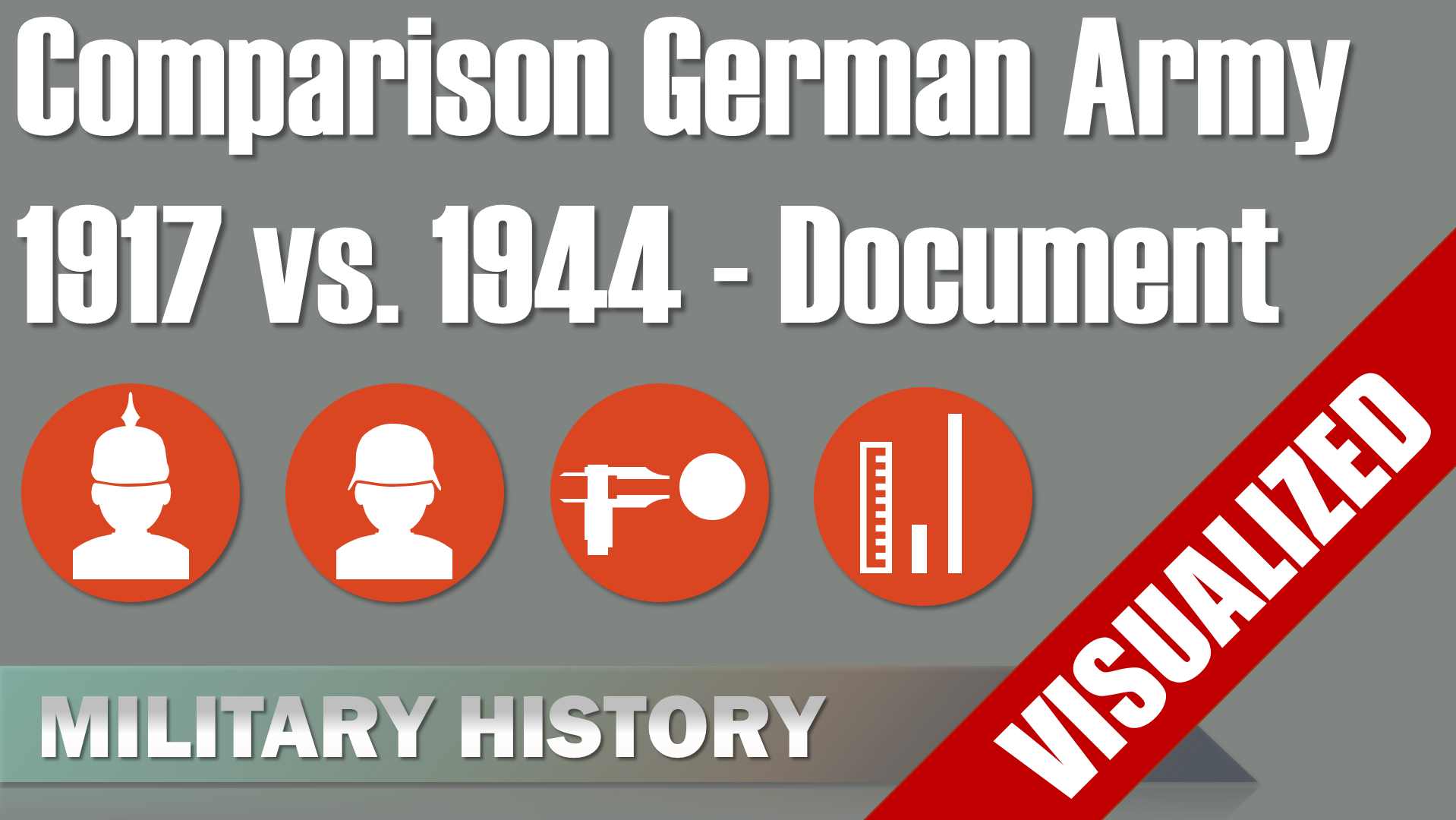 Special thanks to Matthias Hoffmann for providing information on the German Field Army in 1917.

The title of this video may appear like click bait, yet actually it is the short version of a document from the organization department of the German Army’s Generals Staff in July 1944.

The original title of the document was:
“VERGLEICH DES FELDHEERES 1917 MIT DEM FELDHEER 1944” which means “comparison of the field army in 1917 with the field army 1944”

So, this video is mainly a visualization of selected parts of the document with some additional information and context. The document has a quite interesting date, namely the 20th July 1944, which was the day of the best known attempted assassination of Hitler. I don’t know if this is a coincidence or not, after all the officers behind the assassination wanted prevent an unconditional surrender similar to 1918. And in their assumptions stable front-lines were an important foundation for any negotiations. (Müller, Klaus-Jürgen: 20. Juli 1944 – Der Entschluß zum Staatsstreich, in: Beiträge zum Widerstand 1933-1945, S. 5)

What is the Field Army?

Now, you probably want to know what is the difference between the Army and the Field Army? Well, the field army is the part of the Army that does most of the killing and dying, one could say the field army is out in the field. For some contrast, other parts of the army would be the Reserve Army (Ersatzheer) or the Occupation Army (Besatzungsheer).
So, since we got that covered let’s get started.

Now, the total numbers of men in the field army are from December of the previous year, because in the document there are only the numbers given for December 1943 and the number for the First World War is missing, but thankfully someone provided proper sources for the First World War.
Now, the total number of men in the field Army in December 1916 were almost exactly 4.8 million (4 799 095), whereas in December 1943 it were about 4.3 million (4 270 000). Note that this difference is considerable smaller than the gap of 87 division, because these numbers only account for the manpower of the German Field Army and not their Allies.

Now, since we have the total numbers of men and front lengths, let’s see how the many German soldiers were available for each front kilometer. Although note that the total numbers of men are from December 1916 and 1943, whereas the front lengths are from July of the following years. So this part is more about giving you a general idea on the situation than historical accuracy.
For final stages of the First World War there was a total front length of 2800 km, which had around 4.8 million men stationed there, whereas for the final stages of the Second World War there was total front of 3152 km with about 4.27 million men. Thus, we get 1714 men per km in World War I vs 1355 men in World War 2. (2759 per mi, 2180 per mile)
Note that these numbers are only for the German soldiers and don’t include the manpower of all Axis Forces in Europe, which had considerable more manpower in World War 1, thus the difference in men per front kilometer was even more significant.