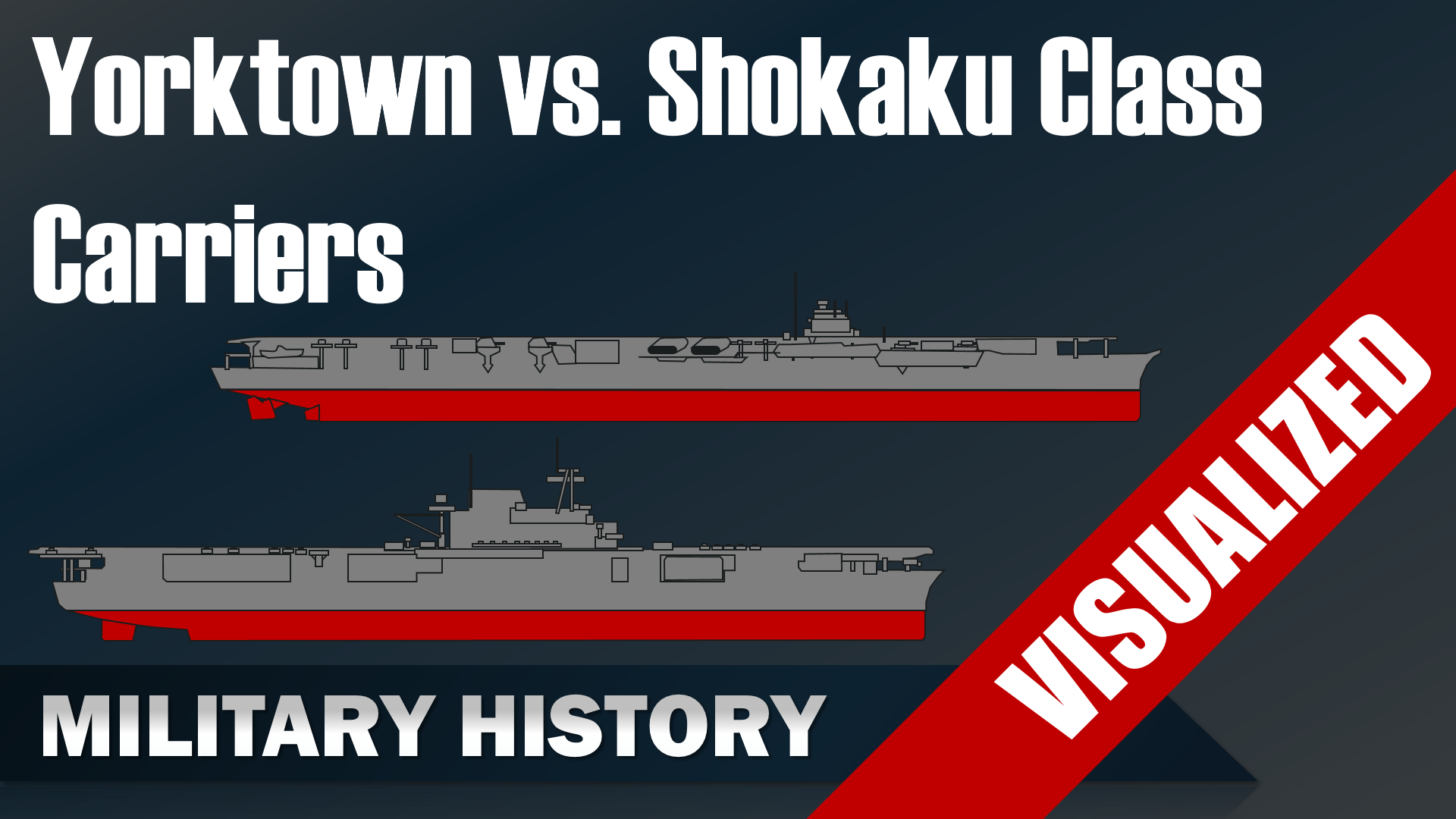 In Mid 1942 two of the most modern aircraft carriers in the US Navy and Imperial Japanese Navy were the USS Enterprise and the HIJMS Zuikaku. So let’s take a look their dimensions, defensive capabilities and aircraft loadout.

The length for the Enterprise was 251 m or 824 feet, whereas the Zuikaku was 257 m or 845 feet long.
Looking at the overall dimensions, one would assume that USS Enterprise would be about the weight of Zuikaku, but according to various sources this wasn’t the case at all. Most values differ, but all sources have one thing in common. Namely, that the displacement of the Zuikaku is significantly higher than that of the Enterprise. Since I couldn’t find a proper explanation, I started asking questions and thanks to several people mentioned in the description, here are the answers.

One aspect to consider is that the Enterprise was built under treaty regulations and the Zuikaku wasn’t, so the values of the Enterprise are probably a higher than on the official records.
But lies are only one part of the story, additionally, there were clear difference in terms of construction and equipment.
First, The Enterprise had a welded hull which is lighter than the riveted hull of the Shokaku class.
Second, the Yorktown class had only one hangar and it was an open hangar, which requires less weight.
Third, the Enterprise was less armored and had a weaker under-water protection.
Fourth, the Zuikaku had considerable more horsepower, which requires bigger and stronger machinery.
These are the main factors that contribute to the considerable higher displacement of the Zuikaku.

Now, in terms of anti-aircraft weaponry in June 1942, the Enterprise had 8 5 inch, 4 quad 1.1 inch and 30 20mm guns. The Zuikaka had 16 5 inch guns and 12 triple 25 mm guns.
One way to compare the AA defense is with some simple math. Let’s take the effective rate of fire multiply it with the weight of the shell and with number of guns. Then sum it all up and we get around 6000 kg per minute for the Enterprise and 4000 kg for the Zuikaku. So every minute the Enterprise could throw a Panzerkampfwagen I at you, whereas the Zuikaku could only manage a light Scout Car.

Besides putting out one third less stopping weight than the Enterprise, the Zuikaku had another problem the tracking speed and fire control systems of Japanese guns were inferior, especially for the 25mm guns. Thus, the effectiveness of those shots put into the air was considerable less than that of the USS Enterprise. This significantly lowered the defensive capabilities of the Shokaku class.

The Shokaku class carriers originally had no radar, both ships were later equipped with radars but that was after the battle of Midway. The lack of radar was major weakness, because the only way to detect enemy aircraft was with optics and the Mark I Eyeball. Since Japanese Aircraft (Stille: p. 9) radios were of low quality often no proper warning could be given by or to Combat Air Patrols in order to provide a coordinated defense.

In contrast the Enterprise was equipped with a radar that could detect small aircraft at about 3000 m altitude at a range of about 90 kilometers or 55 miles.

Now, there are two interesting aspects here:
First, the total number of planes of the Enterprise is higher than that of the Zuikaku, although the Zuikaku had two hangars.
Second, there is a significant higher amount of dive bombers on the American side.
Why was that the case?

The US and Japanese approach towards storing and servicing aircraft was different the US used a so-called deck park. As a result the US carriers used the Hangar space and the flight deck to store planes, whereas the Japanese were limited to the hangar space.

Now, why were there so many more dive bombers on the US side?
This is due three reasons, first the US Navy assumed that Torpedo bombers were inferior and kept them mainly for attacking Battleships. Second, the US Navy thought that a dive bomber attack is better suited for limiting flight operations of an enemy carrier. And third, the US doctrine lay an emphasis on carrier based scout bombers, which could also be used as normal dive bomber. In contrast the Japanese used scout planes from Cruisers and Battleships to perform recon.

To conclude, the biggest drawback of Japanese carriers lay in their limited defense capabilities, due the lack of radar, inferior AA guns and weak fire control. Whereas the US Navy increased the number of fighters early on to strengthen further their active defense, the Japanese didn’t, thus widening the gap.
Nevertheless, the Shokaku class carriers were good or even great carriers, but against an enemy that constantly and quickly adapted a small flaw can become a major flaw in a short amount of time. After all the best weapon, tactic or strategy can be outclassed with proper counters. In war as in life nothing stays static for too long.

Wildenberg, Thomas: Midway – Sheer Luck or Better Doctrine?
Note: That quite some assumptions in this article are dated, see here.

Ask Historians – Why were American carriers so much more durable

(1) To put it simply, when it comes to data about WW2 ships everything seems to be a bit off. Many sources differ all the time. I have like 3 different crew values for the USS Enterprise, basically every book, website and Wikipedia has one or several different values.

(2) Furthermore, thanks to various commenters on reddit and the paradox forums I know that this is very common. Also there seems to be an error on the length of the Enterprise according to this very well illustrated and sourced forum post: Calling all USS Yorktown CV-5 fans

(3) The same goes for articles (see sources Wildenberg and reddit comments on it).

(4) So, I tried to use only one source for each value in order to keep the data as clean as possible, also I did some cross-referencing, but since most experts seem to disagree take everything with a grain of salt, when it comes to displacement, dimensions and crew members.

(5) Values and equipment is from Mid 1942 or before. Zuikakus plane loadout is from the attack on Pearl Harbor, because she and the Shokaku were not present at the Battle of Miday. Note that especially the AA loadout changed considerable several times, in the end the Zuikaku had 96 25mm AA barrels and the Enterprise was equipped with 40mm bofors.

(8) There is a lot of wrong or dated information out there.