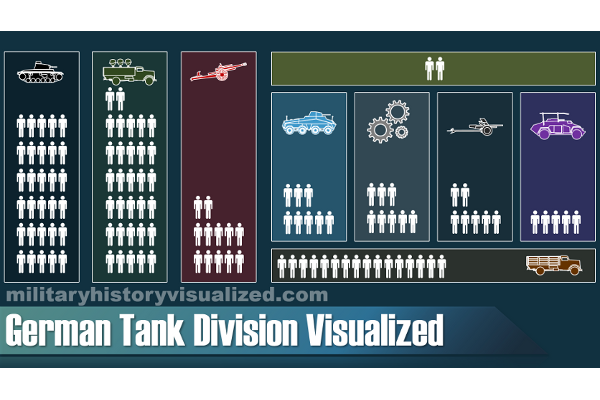 Below is the Script to video, note that this is not an article and is probably not really meaningful without the video.

A German Tank division in 1939 consisted of about 12000 men. 3000 of them were assigned to the Tank Brigade, 3200 to the motorized infantry brigade and 1200 to the artillery regiment.
The remaining 5600 were assigned to supply, recon, engineering, anti-tank, signaling and staff units.

These are the numbers for the “Erste Panzer Division” the First tank division. It had 93 Panzer I, a tank never intended for combat and only armed with machine guns. 122 Panzer II, a mere 26 Panzer III, 56 Panzer IV and 12 Panzerbefehlswagen. Thus, giving a total of 309 tanks, slightly below the intended size, but numbers without context are like most politicians, quite useless and untrustworthy.

Now, a closer look on the planned organization and structure of the Panzer formations.

The Tank brigade consisted of 2 regiments with 2 battalions each and each of these battalions consisted of a staff company, two light companies and a medium company.
The “Stabskompanie” or Staff Company, consisted of a Signaling Platoon with two Panzerbefehlswagen and a Panzer III. Note that the Panzerbefehlswagen looks like a Panzer III, but it only had a fake gun and turret was welded to the hull. Yet, it was crucial to the performance of the German Panzer units, because it provided important command & control facilities.
Furthermore, the company had one platoon of light tanks consisting of 5 Panzer II.

So let’s take a look at the two light tank Companies or “Leichte Panzerkompanie”.
They consisted of a Company Section with two Panzer III. A Light platoon with 5 Panzer II and three platoons of 5 Panzer III each.

Finally, the Medium Tank Company or “Mittlere Panzerkompanie”.
The Company section with two Panzer IV and the light platoon with Panzer IIs are almost identical to the light companies. But the three platoons all consist of 4 tanks each instead of 5 tanks.
Time to take a look at the big picture again.

These companies made up one battalion with 71 tanks. Thus with 4 battalions for the Brigade there is a total of 284 tanks for frontline duty, since some tanks were kept for reserve and command duties.
Now, again this was the intended setup, the number of available Panzer III was very low, thus their roles needed to be filled by other tanks like the Panzer I and Panzer II.

So far for the tank brigade, time to take a look at the division as a whole again. Since the tank brigade was supported by an infantry brigade,
90 armored cars, 48 anti-tank guns, 12 anti-air guns and 24 pieces of artillery. Which was a quite considerable amount of equipment

1st Panzer Division In accordance with the 1939/40 Mobilization Plan