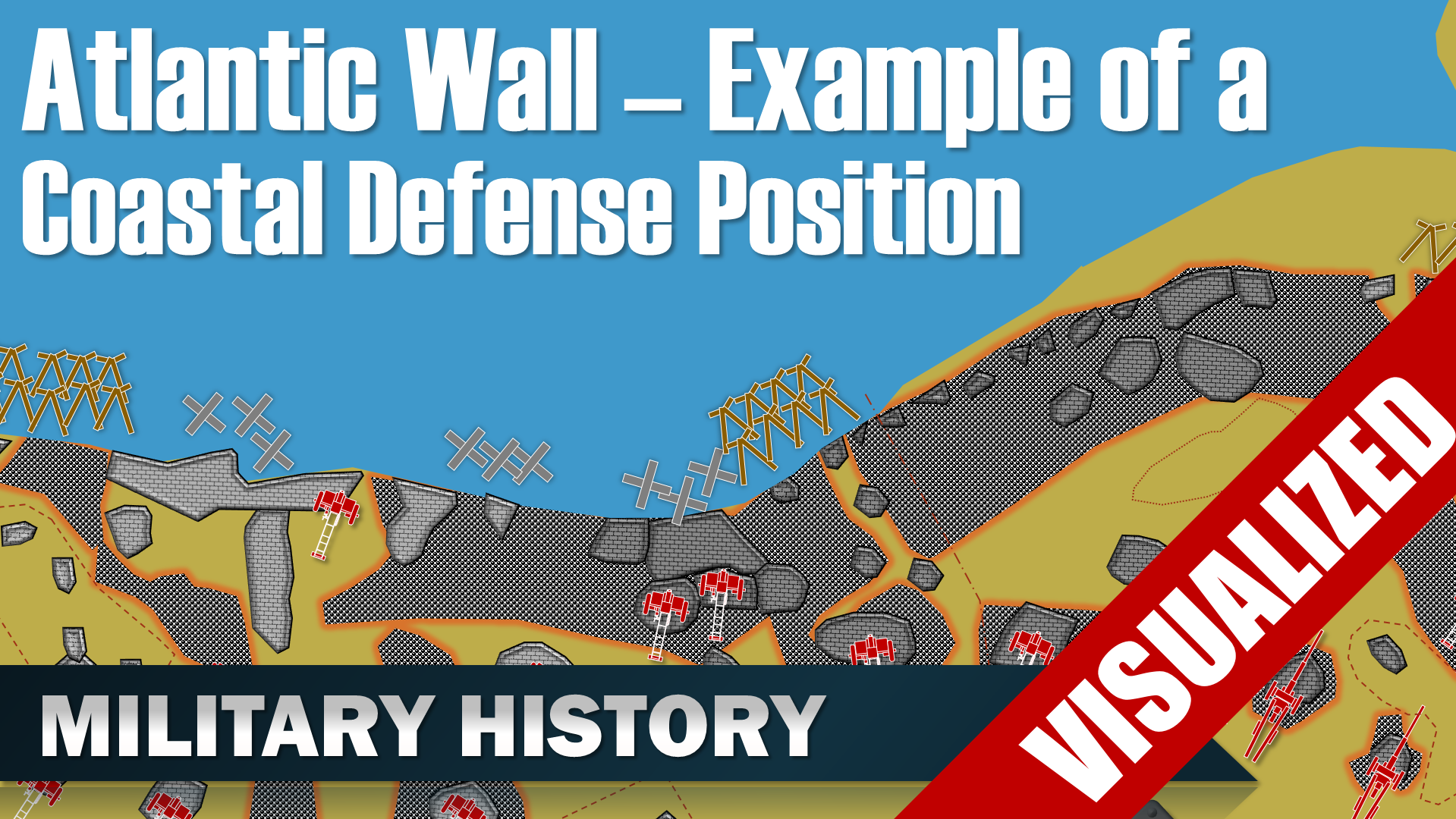 The Atlantic Wall or “Atlantikwall” in German was an extensive system of coastal defences and fortifications reaching from the South of France to the Northern parts of Norway. In some areas the defenses were quite formidable, whereas in others areas they were lacking. In this video I give you a short overview on the French parts of the Atlantic Wall and then show you how an individual infantry division was setup for coastal defense.

Principles and Organization of the Defense

Let’s start with the basic principles of the German defensive setup. The German High command analyzed the amphibious operations in Italy in 1943 and concluded that the most successful way to defend against an Invasion was to destroy the enemies landing force as soon as possible. The plan was to deploy strong forces in the coastal area in fortified positions, these troops should be stacked properly to provide a deep defense and supported by local reserves for counter-attacks. The units were ordered to hold out until the end. This should provide enough time to mount a strategic counter-attack with motorized units. (Deutsche Reich & 2. WK: Band 7; S. 463 (amazon.de affiliate link))

The last directive was probably influenced by the fact that the chances of surrendering were considerably higher on the Western Front than on the Eastern Front, because it was known to most German soldiers that they were treated quite well by the Western Allies. Thus surrendering was a viable option to German soldiers on the Western front. The German Generals were very well aware of this and it was quite troublesome for them. (Deutsche Reich & 2. WK: Band 7; S. 499-500) Since, we covered the basic principles of the defense, let’s take a look at the high-level organization of the defense.

Organization of the Defense on the strategic level

Among the German Commanders and leaders there was a consensus about the general defensive strategy, but there was some serious debate on how the units for a counter-attack should be deployed. There were basically two approaches, a decentralized approach in which motorized units were located closely to the front lines or a centralized approach, whereas a large group of units was stationed farther from the front. (Deutsche Reich & 2. WK: Band 7; S. 464)

In January 1944 a decisions was reached. One part of the tank divisions would be stationed close to the landing areas and additionally a central reserve would be deployed in Paris. The whole discussion and planning of the defense strategy was almost exclusively performed by army commanders, the Navy and Air Force were not really considered. (Deutsche Reich & 2. WK: Band 7; S. 464-465) So let’s take a look at the construction of the Atlantic Wall.

This is also reflected by the fact that the intention was to destroy the enemy during the invasion or shortly afterwards, but not prior to the landing, which was of course almost impossible due to Allied Air and Naval superiority. Yet, it underlines again the primacy of the German Army above the other branches. (Deutsche Reich & 2. WK: Band 7; S. 465)

The construction of the fortifications initially was mainly aimed at freeing up soldiers for the other front lines. Yet this changed in Fall 1943, up from that point more focus was put into providing a strong defense against an upcoming invasion.(Deutsche Reich & 2. WK: Band 7; S. 466)

The German High Command assumed an attack would be most likely in the Calais and Le Havre area, thus there was a strong regional focus on these areas. The regions of Normandy and Bretagne were of lesser importance, but everything else in France was of minor importance and very little fortifications were planned and constructed there. (Deutsche Reich & 2. WK: Band 7; S. 465)
The constructions of the Atlantic Wall required a large amount of construction workers. Although many foreign workers were transferred into Germany, in June 1944 still around 140 000 non-Germans and 18 000 Germans were used for the build-up of the Atlantic Wall. (Deutsche Reich & 2. WK: Band 7; S. 466) Yet, a large part of these workers were used to repair damages from the Allied bombing campaign and French Resistance attacks, furthermore some were also used for building up V-weapon bases. (Deutsche Reich & 2. WK: Band 7; S. 466) Let’s take a look at the total numbers.
Until the end of 1943 around 8500 fortifications and emplacements were constructed. Until the invasion about 12 200 (12247) fortifications in total were finished on the Western French Coast. Additionally, half a million beach obstacles and 6.5 million mines were placed. These fortifications were equipped with a large amount of artillery, anti-tank and anti-aircraft, which were often protected by concrete emplacements. In the Normandy region there was often a lack of resources and workers, thus even some large guns were without proper fortifications. Yet, in the areas were the Germans anticipated an Allied attack the fortifications were numerous and well-protected against bombing attacks. (Deutsche Reich & 2. WK: Band 7; S. 467-470)

Organization of the Units

Now, the chain of command and the authorities were quite complicated due to regional, functional and other structures. Some of these structures may have been useful, but often it was more about the prestige of some commanders. I spare you the details and just give you an example on how the various “relationships” of the 2nd Panzerdivision. (Deutsche Reich & 2. WK: Band 7; S. 474-475)

The division was part of the Panzergruppe West, operationally it was under the authority of the I. SS-Panzerkorps, territorially (05:00) it was under the command of the Military Administration in Belgium and Northern France and in terms of supplies it was attached to the 15h Army. This layout was not an isolated case. (Deutsche Reich & 2. WK: Band 7; S. 474-475)
CAPTION: „I will get a Bier now, because you are all drunk anyway.“
After all German bureaucracy is like war, and war never changes.

Let’s take at the quality of the troops. The units that manned the fortifications of the Atlantic Wall were mostly second rate German infantry divisions, they so called “bodenständige Divisionen”, which were infantry division intended for a static defense. They only had a very limited amount of transport capacity, no recon units and usually only 2 infantry regiments instead of 3. Furthermore, they often lacked properly trained NCOs and officers. These units were also often equipped with various captured equipment, thus of lower quality and complicating the logistical situation. (Deutsche Reich & 2. WK: Band 7; S. 481) In total around 25 of these static divisions were present since Fall 1943. (Deutsche Reich & 2. WK: Band 7; S. 476)
Additionally, various units were shipped to France to be regrouped and reinforced, yet usually these units were extremely depleted and exhausted. Thus, they were of limited use especially since the often replaced other troops that were transferred out to other front lines. (Deutsche Reich & 2. WK: Band 7; S. 476)

The motorized divisions, which should constitute a counter-attack were limited initially. In Fall 1943 only 2 were deployed in France, yet this number increased to 11 divisions until June 1944. About 5 of these units were sufficiently equipped, but the 6 others lacked tanks and other equipment. In total there were about 1860 armored vehicles available at the time of the invasion. (Deutsche Reich & 2. WK: Band 7; S. 480-481)

The State of the Air Force and Navy

Before we take a look at the defense layout of an infantry division on the coast, some information about the overall state of the German Air Force and Navy on the Western front. The situation was dire and got worse, it was unable to provide proper defense against the continuous air strikes from the Allies. Furthermore, in May 1944 the Allies focused their bombing attacks on the German fuel production, which considerably limited the ability of the Luftwaffe in its mobility and training. In case of an invasion, it was planned to transfer several air units from other areas. Yet, still that would only bring the number of planes to a total of around 1650 operational aircraft. (Deutsche Reich & 2. WK: Band 7; S. 483-485) At the same time the Allies had more than 9000 aircraft available over Normandy. (Source: Wikipedia )

This air supremacy of the Allies also prevented almost any operations of the German Navy. Due to detection by enemy radar the German ships couldn’t leave the harbors without being faced with immediate air and naval attacks. Thus, deploying naval mines in a systematic fashion was not possible. There were German plans to mine the coastal regions in Normandy, but the Allies successfully prevented these operations. (Deutsche Reich & 2. WK: Band 7; S. 485-487)

Defense Layout for of an infantry divisions (348th Infantry Division)

The 348th consisted of two infantry regiments. One regiment defended the Northern region and the other the Southern region.
There are numerous emplacements and defensive positions. I don’ really have any clear information about them, but I assume most of them were fortified with concrete fortifications considering the amount of passive defenses.

Now there were various static defense and obstacles:
First off there were a “few” mine fields, yeah, well, now you know why they needed 6.5 million of those little bastards.
There were 4 areas that were protected by hedgehogs in front of them.
Another 5 areas that used ramming logs some of them are located in the water or directly on the beach area.
And finally one area was protected by an anti-tank wall, which was the location of one the headquarters units. So let’s take a closer look at those.

The headquarters unit for one infantry regiment was located here at the anti-tank wall, which is located right behind the forward area of the defenses and also in well centered. The same goes for the second regiment headquarters in the South. At little bit more behind, but again in the center is the divisional headquarters located, which is also the position for the headquarters of the artillery regiment and the signal battalion.

Now there were 5 areas for reserves, 4 of divisional reserves and one regimental reserve. The only regimental reserve was located very close to the front line in the North. A little bit more behind was a divisional reserve area. Then there was a large reserve area next to the division headquarters, where a company of assault guns and an anti-tank platoon were deployed. There was another reserve area next to the division HQ and one in the Southern area close to the front line.

To summarize, the Atlantic Wall wasn’t an impenetrable defensive line nor was it just hollow propaganda. The quality and quantity of the defensive positions varied a lot and was closely related to the German Commanders assumed invasion location, which was not the Normandy. The strategic reserve to counter an invasion was deployed as a decentralized reaction force in combination with a centralized mobile force to perform counter-attacks.

Due to the Allied Air Superiority the German Air Force and Navy were basically incapable of providing any substantial contribution during the preparation against the invasion and the invasion itself. Furthermore, the constant air strikes severely reduced the amount of the available work force due to the need for repairs that couldn’t be spent on constructing fortifications and obstacles.

Germany and the Second World War – Volume 7: The Strategic Air War in Europe and the War in the West and East Asia 1943–1944/5 (amazon.com affiliate link)