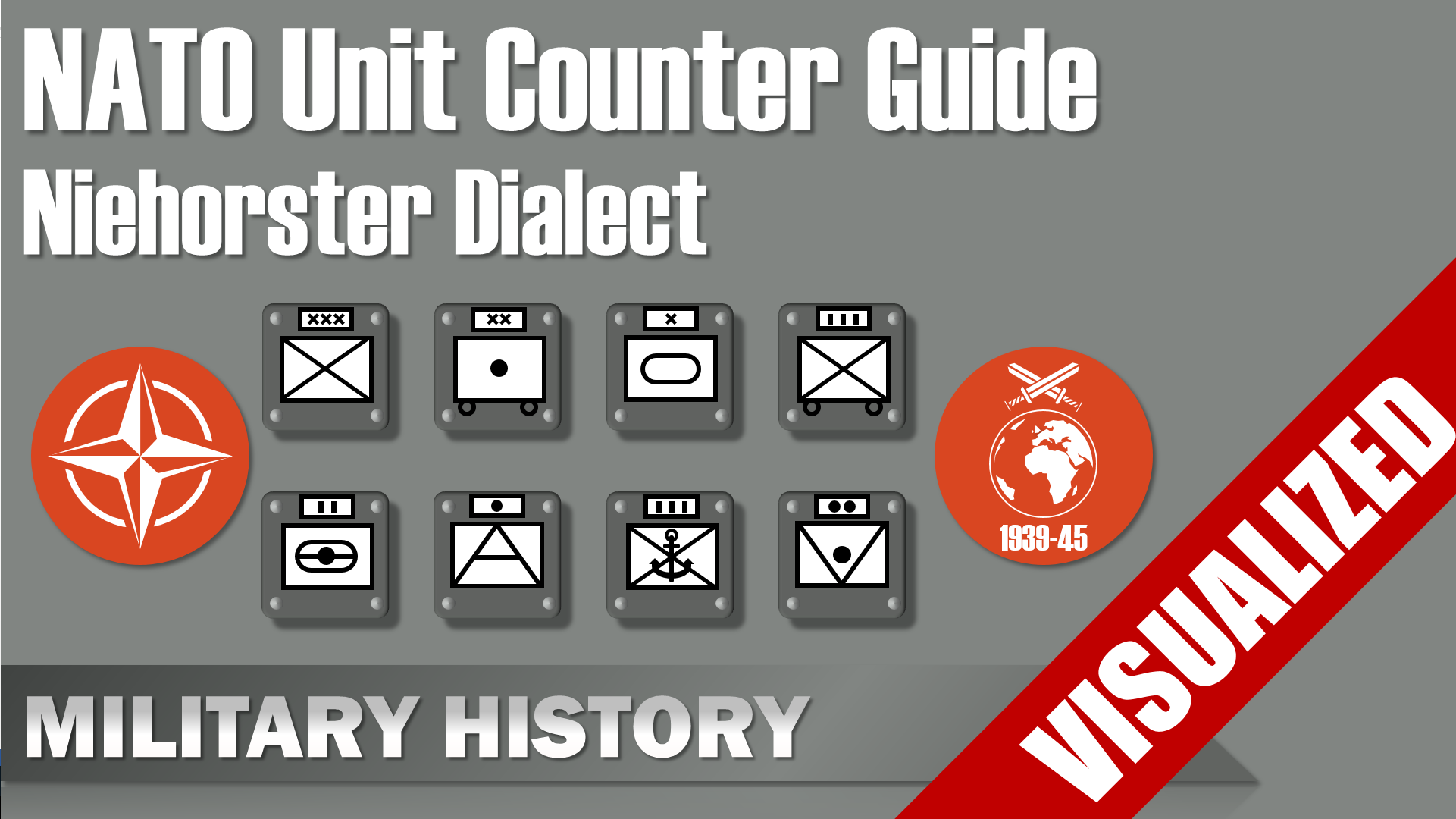 Well, time to look at the NATO counters or to be more exact at what I called the Niehorster Dialect. For all those who don’t know, Leo Niehorster did a lot of research on unit organization specifically the German Army in World War 2. Additionally, he provides a lot of information on his homepage for free.

Now, why doesn’t he use the full NATO standard, well because NATO didn’t account for certain unit types that were common in World War 2, hence there are some slight differences. I prefer the Niehorster dialect, because it encompasses nearly all WW2 unit types and it is also well-documented and updated.

Note that these symbols are mainly NATO inspired, but there are a few but significant differences, e.g., infantry looks the same, but marine infantry looks quite different. Niehorster uses an anchor, which looks awesome, whereas NATO uses waves, which makes the counter look like hippie infantry. Yeah, well, the term Joint Chiefs of Staff probably confused some people in the design department.

So, let’s start with the Infantry, a big X. Why? That is simple, those should represent the two bandoliers of Napoleonic Infantry. In general, these symbols make sense in one way or another and once you know the background or a hint, they are quite easy to remember.

Next up is artillery, one big black dot. For me that symbol is the most obvious one. And a simple way to remember it is that artillery tends to make lot of holes in the ground. Although World of Tank players have a bit of different view, they will agree on the hole part, but might indicate that it is actually not located in the ground, but about 1 meter above.

Next up, is the mighty pony force, the Cavalry, which is a black triangle that takes up the lower right. Now, the best way to remember this is symbol is that you think of it as half man and half beast.

Now, there is a very similar symbol used for recon troops, simply because to a large degree they originated or had quite many cavalry units in them, e.g., an early World War 2 German infantry divisions often contained a substantial number of cavalry units in their recon battalions.

And finally, for the last basic units, the Tank. Which looks like this, now I don’t know how to call the geometric object, but it clearly resembles the tracks of a tank. So this is probably the most obvious symbol out there.
Now comes the fun part. Combining the basic unit types.

Now let’s take the tank symbol and combine it with the infantry, looks great, this is now an armored or mechanized infantry unit.

If we combine an infantry with an artillery unit, we get an infantry gun or infantry support gun unit, which is a specialized artillery weapon that is usually used as a direct fire weapon unlike regular artillery, additionally it is also allocated to infantry regiments or battalions and not within the artillery regiments.

Next up, let’s combine the recon unit with the tank, now we have an armored recon unit. Well, I think you got the basic idea of NATO combinatorics.

So time to look at some more advanced unit types.

Let’s start with the anti-tank gun. Well, the dot clearly indicates a gun, whereas the two lines can be seen either as a firing arc or as an arrow directed to the ground, which makes more sense if look at the next unit.

The Anti-Aircraft unit, because in this case the arrow is directed to the top. Additionally, instead of a dot, it has a short horizontal line, which also can be seen as a horizon.

An engineer unit, is an E turned by 90 degree, which also can be interpreted as a bridge or just a drunken engineer worshipping the porcelain god. As usual, it is your call, which hint you take.

Again you can combine all these units, for instance a maintenance combined with a Tank symbol gives Armored Maintenance or Tank Recovery unit. Which is a unit with recovery tanks like the Bergetiger or theM32 Sherman based recovery tank.

So, let’s add one more layer to this the unit modifiers.

If you add a black bar at the top, this means we have a headquarters unit. For instance, this unit would be an artillery headquarters battery.

Now, here we have transport unit, when we add the previous bar at the bottom, this indicates a supply, service or quartermaster unit.

The next modifier is important for tank units, a single vertical line on the left indicates a medium modifier, like here we have a medium tank company.

Whereas a heavy tank company, would look like this. It is a vertical bar instead of a just a line.

Now, since we covered the most important tank modifiers, time for the various infantry modifiers. A small triangle to the middle of the rectangle indicates a mountain unit, in this instance mountain infantry regiment.

Replace the triangle with simplified wings and you get an Airborne regiment.

And if add an anchor, you guessed it, it is a Marine unit.

If there are two circles at the bottom of the rectangle these indicated a motorized regiment.

Now, finally, the indicator at the top indicates the size of the unit.
If there is no indicator there, it means the unit is of undetermined size. If it is just one dot, it is a team or fireteam (Trupp). Two dots means a squad or section, 3 dots a Platoon or Detachment. Now, 1 vertical line is a company or if it is an artillery unit it is called a battery. 2 lines mean a battalion, 3 lines a regiment. Now, the next one is the brigade with one X, 2 X are a division and 3 X a corps. 4 X an Army and 5 X an Army Group or in case of the Russians a Front.

Note that although there is a clear hierarchy this is a very theoretical depiction. Depending on the time period, unit type and also country certain unit sizes may be omitted, e.g., some infantry division layouts don’t use brigades, also some nations – especially those which like to drink tea – have a tendency to use the name Brigade for battalion sized units.