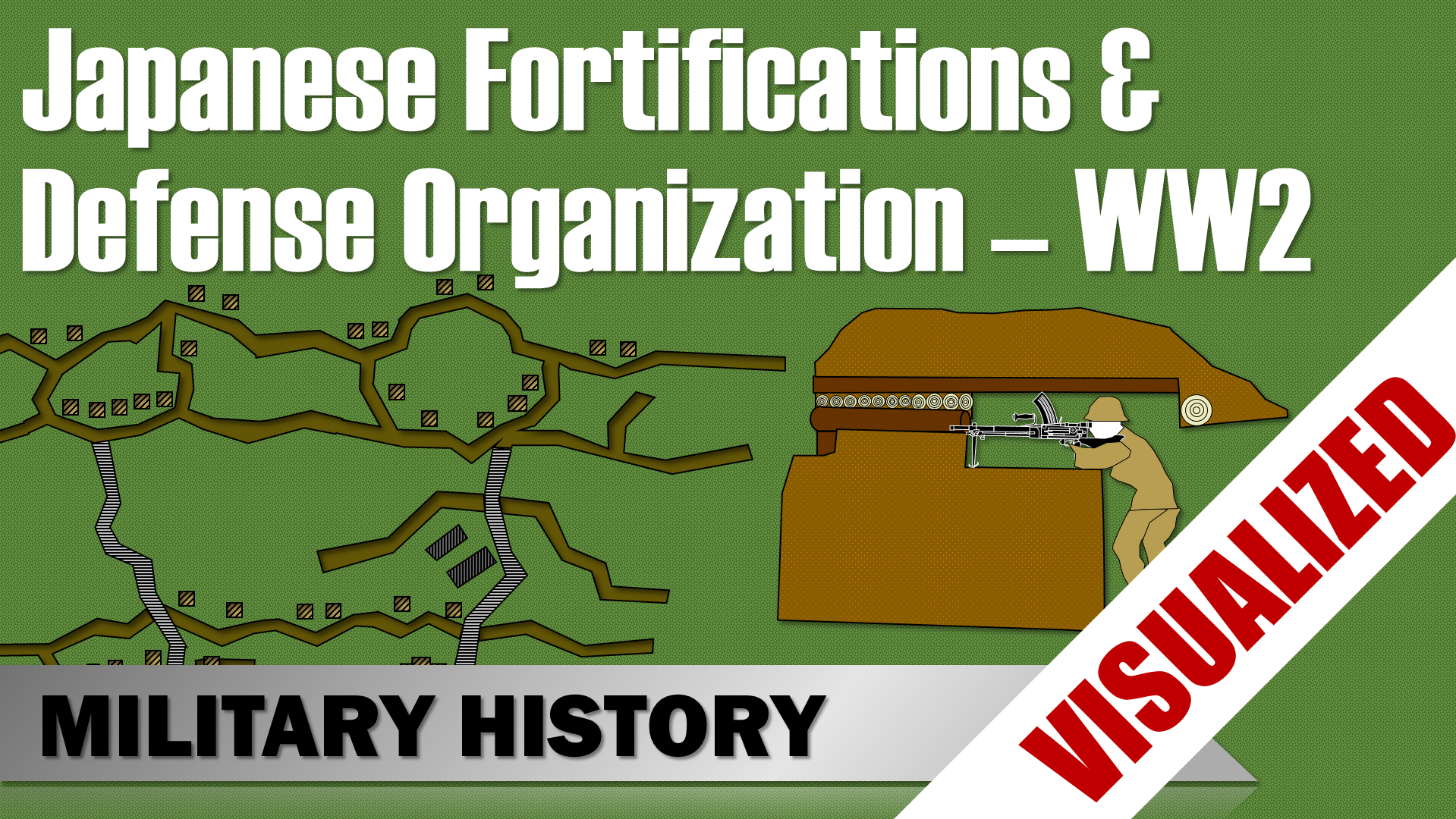 Time to take a look at some Japanese field fortifications and defense measures. Note that in this case I used mostly sources from US military intelligence in World War 2. Unlike the Atlantikwall video this video is about the small scale units, hence you will see an individual bunker and also layouts for company and platoon defenses. Note that every country had some distinctive features, but the general layout were to a certain degree quite similar, if we consider this statement from the in publication Japanese in Battle from August 1944:
“Examples of typical defence layouts, from platoon to battalion positions, are shown at Appendix ‘ A ‘. They show no remarkable difference in principle from our own layouts.” (General Headquarters, India – Military Intelligence Directorate: Japanese in Battle – Second Edition, August 1944, p. 5)

In General, besides their attitude towards defensive Combat the Japanese were renowned for both their elaborate defensive fortifications and their tenacity in defense. One area they were clearly lacking though, was the use of mines. But let’s take a closer look at those issues.

The Japanese constructed their bunkers usually from logs and earth. The logs were interwoven and strongly attached to each other. To strengthen the roofs of bunkers against indirect fire, they used alternating layers of logs and earth. This provided excellent protection and usually gave full protection against mortar and light artillery fire. (War Department: Tactical and Technical Trends, No. 21, March 25, 1943, p. 17)
Furthermore, for the Buna area (southeastern New Guinea) it was stated that:
“in addition, the bunkers had been planned and built for just this purpose long before the campaign actually started, and the quick jungle growth, sprouting up over the earthworks, gave first-class natural camouflage.” (War Department: Tactical and Technical Trends, No. 21, March 25, 1943, p. 17)
[Buna-Gona Battle (1942/1943)]

The tenacity and fanatism of the Japanese troops in World War II is well known and Field Marshal Slim wrote about the individual Japanese soldier the following:
“He fought and marched till he died. If 500 Japanese were ordered to hold a position, we had to kill 495 before it was ours – and then the last five killed themselves.” (Slim, William: Defeat into Victory, p. 615)

After all the Japanese doctrine and training put a strong emphasis on morale factors and tenacity. (Drea, Edward J.: In Service of the Emperor, p. 64) An US Army engineer remarked about the campaign in Buna the following:
“It would be impossible to overstress the tenacity with which the Jap[ane]s[e] clung to their prepared positions. Grenades, and ordinary gun and mortar fire were completely ineffective. There were many instances (not isolated ones) where dugouts were grenaded inside, covered with gasoline and burned, and then sealed with dirt and sand,—only to yield, 2 or 3 days later, Jap[ane]s[e] who came out fighting.” (War Department: Tactical and Technical Trends, No. 21, March 25, 1943, p. 17)

Yet, it is also noted that:
“In this respect, the instructions as a whole are very general. They tell “what” should be done, but neglect to tell “how” the minelaying should be carried out. It is possible that, like many such Japanese orders, the details and the operational technique are left to the discretion of subordinate commanders.” (War Department: Intelligence Bulletin Vol III, No. 4, December 1944, p. 15)

Now, general instructions usually require a highly trained force, yet in 1944 all of the Axis members had lost most of the their best trained units.

Now, let’s see what the US engineers noted about a late war Japanese beach defense. In March 1945 US troops landed on the Talisay beach, where the Japanese had established an elaborate defensive system, but since the beach was undefended the site was mostly intact and could be examined by US troops. (HQ Eight Army – Engineer Section: Intelligence Bulletin No. 3, May 1945, p. 2-19) Since the conclusions of the report are rather short and cover mines, fortifications and ditches of a late war Japanese beach defense, I will quote directly from the report:

“1. Japanese employment of bombs and shells as improvised AT and AP mines was excellent. Their effectiveness was limited only by poor concealment, failure to arm some shells, and failure to cover them with fire. The75 mm shells used would have been particularly effective against personnel if they had been properly concealed.“
[AT – Anti-Tank; AP – Anti-Personnel]
(HQ Eight Army – Engineer Section: Intelligence Bulletin No. 3, May 1945, p. 18)

“2. The AT ditches were adequate to stop our medium tank. The log and rail barriers probably would not have stopped medium tanks or bulldozers completely, but would have provided sufficient delay to prevent armor over-running a position covered by adequate AT and small arms fire, and made the tanks good targets for AT weapons. “
(HQ Eight Army – Engineer Section: Intelligence Bulletin No. 3, May 1945, p. 18)

“3. Most of the firing positions and shelters afforded protection only against small arms fire, blast, shell and bomb fragments, and light mortar fire. None of the emplacements furnished protection from direct hits of 100 pound bombs or naval shell fire. Considered as light emplacements, the works demonstrated excellent improvisation and effective utilization of locally available materials by the Japanese.”
(HQ Eight Army – Engineer Section: Intelligence Bulletin No. 3, May 1945, p. 18)

Now, in this part, we will take a closer look at defensive positions. Once the command is given to occupy a position and setup defensive preparation the development was usually prioritized the following way: 1) Establishing the important points in the main line of the resistance, 2) Determining and development of the fields of fire and observation posts, 3) Setting up obstacles for the main line of resistance and 4) the development of communication trenches and personnel shelters. (War Department: Handbook on the Japanese Military Forces, 15 September 1944, p. 101-103) Let’s take a closer look at the development of a company position.

To give you some time-frame for orientation it is noted that:
„The division usually has from about 3 hours to a half day to complete its organization of the ground. Three hours is considered the minimum required to organize a rudimentary system of trenches and obstacles along the main line of resistance. The timework unit in engineering calculations is the 12-man squad which is considered capable of digging about
25 yards [23 metres] of standing fire trench in a little over 3 hours.” (War Department: Handbook on the Japanese Military Forces, 15 September 1944, p. 101)

Now, here you can see a company position after about 2 hours of work. Each of the areas is for one platoon, the firing trenches are for individual squads. The heavy machine gun is deployed along the support position. It is directed in a diagonal line, the same as neighboring units thus the cover is interlocked. After another 4 hours, the firing trenches of the squads should be connected forming a single line.(War Department: Handbook on the Japanese Military Forces, 15 September 1944, p. 102, Figure 86; & p. 100 (HMG))

The position after a week of construction, whereas a week is 56 hours of work. The caption of the illustration reads as follows:
“Squad positions will be enlarged [to] standing trenches. The communication trenches will be deep enough for crawling, and the shelters will be of light construction accommodating 6 men. Only the machine gun shelters will be built to resist 150-mm howitzer fire. The wire entanglements beyond the front-lines will be 8 meters in depth.” (War Department: Handbook on the Japanese Military Forces, 15 September 1944, p. 102, Figure 87)

Now, the same position after about 4 weeks of construction time, would be improved considerably. There would be another layer of wire in the front. And also some basic wiring on the flanks. Additionally, the trenches would be connected in a sophisticated system with adjacent units too. The individual shelters would be covered with roofs. Furthermore, although I am not completely certain, since there is no legend on the original figure, there would be tunnels or covered trenches connecting to the rear area. Looks a bit different than those 3 ovals from the start. (War Department: Handbook on the Japanese Military Forces, 15 September 1944, p. 103, Figure 88; see also Japanese in Battle)

A “Platoon” Defense Position in Burma

Now, let’s take a closer look at a platoon position from Burma. As a quick reminder a company usually consists of three platoons, so basically we take a look at a unit one level deeper.
As you can see it has a circular pattern. In the rear area there is a larger shelter with sleeping accommodation. The circular endings of the trenches are foxholes, whereas each has a one-man-dugout nearby, which had an earth and timber cover. Furthermore, there was a MG position that was well covered too. The report notes that the dugouts near each foxhole and three-bay machine gun position were the two interesting features. So, let’s take a look at the MG position.
(War Department: Intelligence Bulletin Vol III, No. 4, December 1944, p. 15)
(General Headquarters, India – Military Intelligence Directorate: Japanese in Battle – Second Edition, August 1944, p. 24)

So, this is a Japanese Three-Bay Light Machine gun position in Burma from the side. As you can see the roof is constructed with several logs and reinforced with earth. The machine gun would be placed here. Now, why was it called “three-bay”, well let’s look at it from the front. As you can clearly see, the supporting logs divided the firing slit into three areas. And by the way, this is a type 96 Japanese light machine gun and not a British Bren, they look similar, but there is a clear difference between those two, which might not be so obvious.
Problem with the Numbers
Now, let’s go back to the Platoon position, because there is one problem I have encountered, which I couldn’t find a proper answer too. Basically, the numbers don’t add up.

The shown position is according to the description for a platoon. But the problem is that a rifle platoon of an infantry company of an “A” or “B” type division had 3 LMGs and furthermore 62 or 54 men. Now, there is only one position for an LMG, but also the area is quite small for 54 let alone 62 men. Although, the number of foxholes and LMGs would match almost exactly the layout of a rifle section. But I doubt such an error would occur, especially since this layout was reprinted in two different military intelligence publications.
Hence, I must assume that the platoon was far below full strength, but still I am confused that this isn’t noted in the report. But of course there is always the chance that I missed something or made an error. If anyone knows more, please let me know in the comments.

To summarize, although the Japanese had a serious distaste for defensive combat, their ingenuity and improvisation skills allowed them to construct various kinds of excellent field fortifications and defensive systems. Although their ability to lay sophisticated mine fields was limited for most of the war, the Japanese Army took actions to counter this problem and probably would have reached similar capabilities as other forces.

Now, a little public service announcement. I originally wanted to do something about naval tactics in the non-world war era, but since I got a bit sick and thus my mind could only operate at limited capacity, I switched to this easier topic, after all, I am mostly a land-rat from the modern era. So stay tuned, I plan to cover nearly every era of military history, major battle and much much more. Since I get quite a lot of repeating question about what topics I will cover, you might want to check out the frequently asked questions on my homepage.

Drea, Edward J.: In Service of the Emperor