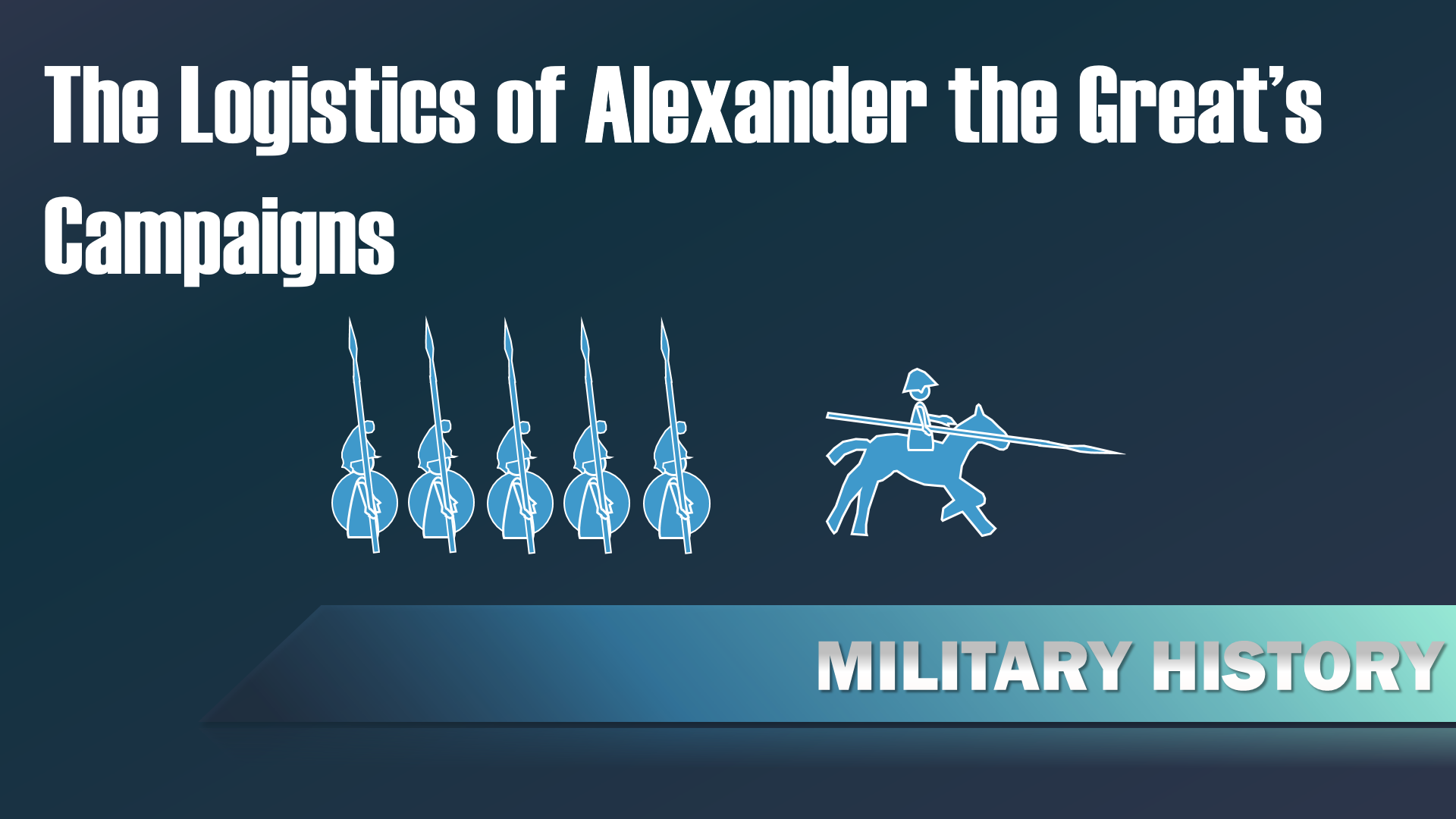 Alexander the Great started in 334 BC his series of conquests that would last for ten years. He successfully invaded and conquered the First Persian Empire. In 326 BC he invaded India, but eventually had to stop the campaign, because his troops wouldn’t carry on. In 323 BC he died in Babylon at the age of 33.

As you can clearly see the territory covered is even quite extensive for any modern army. The question arises how even a small army could be properly supplied in such a vast area. Which brings us to the question of military logistics.

[Sadly, the sources on this topic are sparse. They usually focus on less mundane aspects like feeding the troops and requisition of supplies within the Empire.]

To put it simply, logistics concerns everything from the fuel for your tank, to the food for your stomach and the guy, who cleans the shitter.

Or in a more sophisticated way: Military logistics deals with the determination of demand, requisition and distribution, of men, material, facilities and services.

Hence, the main areas of military logistics are

Note that the common definitions of modern military logistics (usually) wouldn’t include recruitment. But due to Alexanders extensive campaigns and different organizational structure, recruitment is included in our definition.

Initially Alexander fielded around 30000 infantry and 5000 cavalry. These troops consisted mainly of Macedonians and allies. Yet, around 5000 men were mercenaries.
To reinforce his army Alexander had three possibilities:

Recruitment in Macedon was limited, there are only two accounts of it. One about 3000 infantry and another one about 6000 infantry and 500 cavalry. This recruitment was problematic, because it is known that the recruitment unit had to use force in order to complete their operations.

The main source for reinforcements were Mercenaries. Although the initial financial situation only allowed a minimum amount of mercenaries. After capturing the Persian camp and baggage-wagons at Issus, Alexander had a large quantity of gold and silver at his disposal.

To recruit mercenaries’ special recruitment officers were used at known assembly areas. Whereas in an early battle Alexander killed and enslaved a large amount of captured Greek mercenaries who fought on the Persian side, he later recruited such units into his own army. In total it is estimated that around 60 to 100 thousands mercenaries served in Alexander’s army during his campaigns. (Bosworth p. 60, Wirth p. 100)

There is only limited information available about the recruitment in the conquered Persian territories. One account describes a force of around 30.000 men that were trained and equipped similar to the Macedonians. These troops weren’t ready until Alexanders return from India, thus they never saw any combat.

In the first years of his campaign Alexander had to transfer reinforcements on the land route, because he disbanded his fleet due to financial problems. This changed in 332 after large parts of the Persian fleet joined Alexander. In general, the reinforcements were transported by sea and marched to the destination on the Persian Royal Roads. Alexander also took over the Persian communication network to coordinate the reinforcements with his main army. There is only one known account when the reinforcements arrived earlier than the main force.
Overall, Alexander’s reinforcements had to cover vast distances to reach his army. The longest distance covered was by a Thracian unit that transferred from the Balkans to India. It should be noted that these long marches had several benefits. The served as a show of force in the newly conquered regions and also provided security operations along the way.
Now every army needs to be supplied with materiel.

Provision and Acquisition of Materiel

This part is limited in comparison to modern times. It is important to note that the Macedonian soldiers, the allied soldiers and the mercenaries had to bring their own weapons and armor. But due to the extensive distances and duration of Alexander’s campaign this wasn’t always feasible. There is an account of the delivery of around 25 000 pieces of armor to India.
The three main areas for Provision and Acquisition in ancient times were:

The Provision of siege equipment

Was performed by a distinct unit in Alexander’s army. We know it had its own commander, Diades of Pella, but we have no information about its size. Diades was in charge of the construction and improvement of siege towers, battering rams and scaling equipment. If possible the equipment was transported on ships. Some equipment that would have been impractical to transport was constructed at a location close to the siege itself. For example…

We know from the siege of Tyros that some craftsmen were ordered from Cyprus and Phoenicia. The lumber was from Mount Lebanon and delivered to Sidon where the construction took place. Finally, the equipment was transported with ships to Tyros.

Which brings us to the next part the construction and transportation of ships.

Construction and transportation of ships and bridges

Ships and pontoon bridges were used to traverse large rivers and streams. It was important that those ships could be disassembled into smaller parts in order to transport them to the next river. For instance after crossing the Indus, the ships were disassembled into several parts and then transported to the River Hydaspes.
Now, comes the part that most of us have at least virtual experience with, the transportation of loot.

Loot and its transportation was important for several reasons. Now, Soldiers had to take care of their own loot, which could result in over-encumbrance. So, basically Alexander’s soldiers faced the same problem modern gamers face in Skyrim or Fallout. According to the ancient Greek historian Plutarch when Alexander reached the mountains of India, he realized his army was too slow. Thus, Alexander burned his baggage-wagons, those of his companions to set an example and finally gave orders to burn those of his soldiers too, which resulted not solved the problem of over-encumbrance but also raised the morale of most soldiers.
Yet, the more important part is about the major spoils of war. Large amounts of silver and gold had to be transported to mints in order to finance Alexander’s campaign and his Empire. In order to properly haul these precious metals, a large amount of mules and camels was necessary, according to some sources around 10.000 mules and 5000 camels for the larger convoys. Additionally, several thousand troops were used to provide sufficient security.
Early on those transports were sent back to Macedon, but Alexander established several mints along his conquest.

Acquisition and Construction of Facilities

Most facilities Alexander took over from the Persian Empire, mainly the bureaucracy, the excellent Royal Road system, the good courier service and a network of signal beacons. These facilities were crucial in Alexander’s campaign, because they allowed him to efficiently coordinate reinforcements, loot and his Empire. Alexander also established new facilities, mainly the founding of new cities and the construction of mints.

The first and most notable city founded was Alexandria. Many more cities followed, especially in the eastern regions. These founding’s may appear as basic efforts of colonization with economic and cultural motivations, but their main aim was to ensure the military dominance in the regions. Furthermore, they were used to settle wounded and incapacitated soldiers. Additionally, fortresses and other fortifications were built.

The three main services were the provisioning of food, medical service and recreation.
The primary concern was of course the provisioning of food. Alexander was well aware of this fact, and probably for this reason he chose his routes mainly along food sources. Sometimes this lead to some extensive detours, e.g., when crossing through Mesopotamia. Also Alexander put his most able commanders in charge of foraging operations. If possible he organized the construction of supply depots along his marches. Nevertheless, sometimes a lack of supplies couldn’t be avoided.

Little is known about the medical services in Alexander’s army. We can assume that there was something like a medical corps due to the sources mentioning the transport of medicine to India. Another indication is that ancient historians made a clear distinction between dead and wounded soldiers in their records.

Recreation was done mostly in the form of festivals with contests in athletics and horse racing accompanied with music and other forms of entertainment.

Alexander the Great is well known for his tactics, but we can assume that his capabilities concerning military logistics were also fundamental for his success on the battlefield.

In this case my sources were mostly German, but from what I have seen these books are also about this topic, although I didn’t use the English book.

“Bernhard Kast is a participant in the Amazon Services LLC Associates Program, an affiliate advertising program designed to provide a means for sites to earn advertising fees by advertising and linking to amazon.com.”