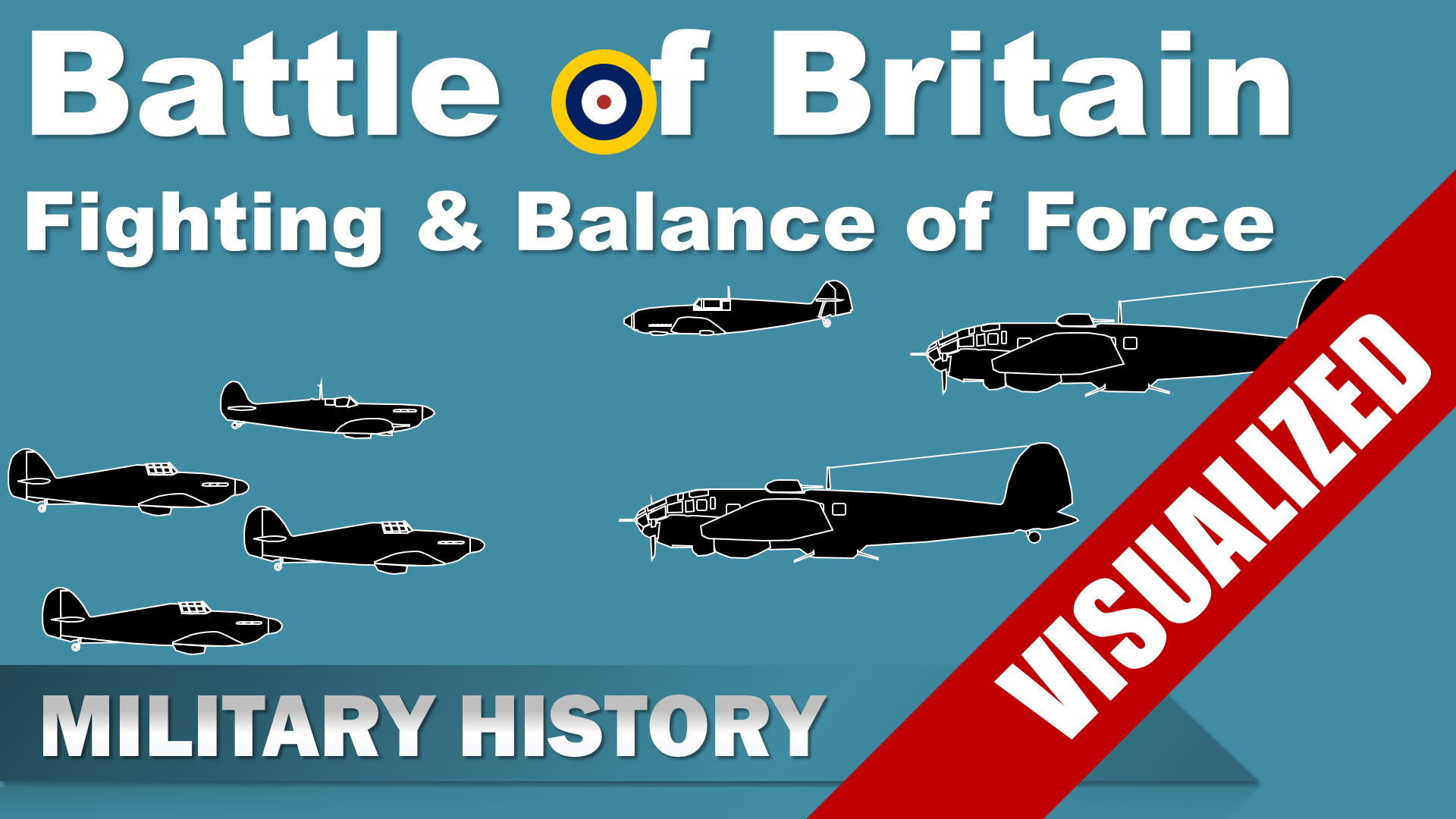 The Battle of Britain is like a cuddly toy, it is popular, everybody wants to touch it and it’s very fuzzy.
Or as professor Overy put it:

“Most battles have a clear shape to them. They start on a particular day, they are fought on a geographically defined ground, they end at a recognizable moment, usually with the defeat of one protagonist or the other. None of these things can be said of the Battle of Britain.”

The geography of the Battle of Britain is wide and fuzzy, due to several reasons. First, the German attacks were flown against various targets like ships, economic targets and airfields. Second, the RAF also flew attacks against German shipping, industry and harbors. And third, it is often neglected that the Royal Navy, Kriegsmarine, Bomber and Coastal Command were also involved, after all the Battle of Britain was seen by both sides as a prelude to the Invasion of Great Britain. Thus, it would be a quite limited view to just think about Fighter Command and the Luftwaffe fighting above England.

Let’s take a look at the overall balance of force or probably more interesting the overall perception of force based on estimates.
Both sides usually had wrong or completely wrong estimates on the other side’s capabilities and amount of operational planes and/or destroyed throughout the whole battle.
Now to get a proper force estimation you need basically three numbers:

The British got the first, second and third number wrong. Whereas the Germans got the second and third number wrong. At first, you might think, well the Germans were less wrong so they should have made better assumptions, well no, because they were wrong in the wrong way. They underestimated the replacement output of the British, whereas the British overestimated the replacement output of the Germans. So let’s take a look at the numbers

Now, in terms of production
The British assumed the German aircraft output was around 2000 planes per month, whereas the Germans estimated that British industry could produce 200 fighters per month.
Well, the real numbers were quite different, the Germans on average could only produce 1000 planes, whereas the British produced a bit more than 400 fighters per month.
So basically, both sides got the production numbers wrong by a factor of at least 2x times, just in different directions.

Now in terms of reported kills both sides also got highly inflated kill numbers, but since the British overestimated all German numbers this number actually corrected their estimates in the correct direction, whereas due to the German underestimation of British production this lead to a very wrong number.
As a result, the Germans assumed to fight a way smaller force than they actually did, which lead to flawed strategic decisions, because it was often assumed that Fighter Command was beaten, thus switching to new stage in a plan that was missing the prerequisite stage.
Around spring 1941 those estimates finally approached reality.

The Battle of Britain is usually divided into four phases. Of course the exact dates of those differ a bit.

The first phase of the Battle was in June and July, it was used by both sides to learn and adapt. The German operations were in a way armed recon combined with hit and run attacks. The amount of bomber aircraft was limited, whereas a large amount of fighter were used. During the day the area of operation was mostly the British coastline, yet during night targets all over Britain were attacked.

The British adapted their approach and only sent a small amount of fighters against attacks, in case they were just diversions. The improved their tactics, coordination and communication.
The Germans learned that their bombers needed escort since Fighter Command prioritized bombers. Which meant that they had to give up flexibility one of their strongest advantages, since German fighter pilots were mostly trained in free-roaming hunting mission.

The second phase began around Mid August 1940.
Now, the German attacks focused on destroying the British fighters and airfields. For about 4 weeks the German started around 50 main attacks against airfields, yet only about 30 of those were fighter airfields. Additionally, there were around 1000 small raids against other targets like industry, supplies and communications, whereas there were only 6 major raids against radar installations.

The attack on the airfields were of limited success, some were put out of operations for several days or nights in total, whereas by end of August German Air Intelligence assumed that at least 8 airfields were completely knocked out and many others badly damaged. This was clearly not the case, since no airfield was permanently put out of action.
Fighter Command adapted and used squadrons to protect important airfields, whereas others attacked the raids. Hurricanes were usually used against bombers, whereas Spitfires were used to attack enemy fighters.

The British defense system described in my earlier video was probably never really understood by the Germans, they assumed the British were fighting a decentralized battle, where each airfield fought for its own. This was probably the reason, why there was no systematic attack on radar installations. Furthermore, the Germans overestimated the amount of damage they inflicted against fighters or installations. They assumed that in August about 50 % of the British fighters were destroyed. In early September it was reported to Göring that the Fighter Command had only about 100 operational fighters left.

Well, the real numbers were a bit off, if you define the difference of 600 fighters as a bit.
Yet, the heavy fighting took a toll on both sides.

During the time period from 6 August to 2 September the Fighter Command lost 440 fighter planes. Whereas the Germans lost 440 in the shorter period from 8th August to 31st of August. Additionally the lost another 460 aircraft.

Due to the extensive fighting the Luftwaffe and the Fighter Command showed signs of exhaustion.

Yet, in early September came the switch to attack primarily London, which removed pressure from Fighter command. This decision is actually almost uniformly seen as the beginning of the third phase.
Now this decision is usually regarded as a revenge attack for the bombing of Berlin. This assumptions seems to be wrong, first the attacks are often solely attributed to Hitler, but as Overy puts it: “The decision to launch attacks on London rested with Hitler, but all the preparation was in place long before.” Second, London was already bombed before the bombings on Berlin.

The attack on London was problematic for the Luftwaffe. The fighters were operating at the limits of their range. The losses from the previous weeks of heavy fighting were extensive and Göring ordered the fighters to fly not above the bombers anymore, but directly with them, which lessened their flexibility even more. Due to the high losses, main bombing attacks switched gradually to night bombing.

For the London attacks the Luftwaffe attacked from a higher altitude, this presented several problems for the RAF. First Radar was less accurate and second their fighters usually couldn’t get above the German planes, which was the ideal attack positions. To adapt to this situation fighters were given more time to assemble and Spitfires were flying high altitude patrols.
The losses for the Luftwaffe were high, in the first week the Germans almost 200 bombers and 100 fighters. Whereas the RAF lost 120 fighters. The losses continued to be high and after about 10 days the Luftwaffe switched to night-time attacks.

Although the invasion of England was called off the Battle of Britain wasn’t over, the air attacks on Great Britain were continued and around October 1940 it entered the fourth and final phase.

This phase consisted mostly of night bombings by bombers and large daylight fighter operations.
The night bombings could only be engaged by anti-aircraft fire and thus the losses were minor, after October the German losses were to 50 % from accidents related to weather conditions.
The daylight operations were performed with fighter-bombers that were heavily escorted. The goal was to finish off the British defenses, which only made sense due to the complete wrong estimations of German Air Intelligence. Yet, these attacks were flown at high altitudes were the Bf 109 had a performance advantages thus the loss ratio of the Fighter Command was increasing, but it was too late and too little. Finally in November the daylight operations faded away and the Battle of Britain was over.

The course of the battle can be represented in numerous ways, probably the easiest way to demonstrate the continuous shift is by showing the shift in the number of fighter pilots.

This clearly shows that the notion of “the few” against “many” may be a bit off. But the notion itself isn’t completely incorrect, it is just a matter of perspective. Because 1) these are only the numbers for fighter pilots and 2) the Fighter Command usually engaged first with a small group of fighters. Thus a small group of British fighter often met a big German air group.
This is a good reminder that the small picture is often more intriguing, but the big picture is usually closer to the truth. Or to put it another way, it is hard to analyze a war while you are sitting in a trench or a cockpit for that matter.

(1) Almost all numbers are from Overy: The Battle of Britain (see sources).
(2) Estimates and actual numbers are often from different time, they are intended to show how off the estimates were NOT the actual balance of force.
(3) Most numbers are rounded.
(4) The composition of plane-types in the visualization is not accurate except when it is explicitly a number stated fort that type of aircraft.