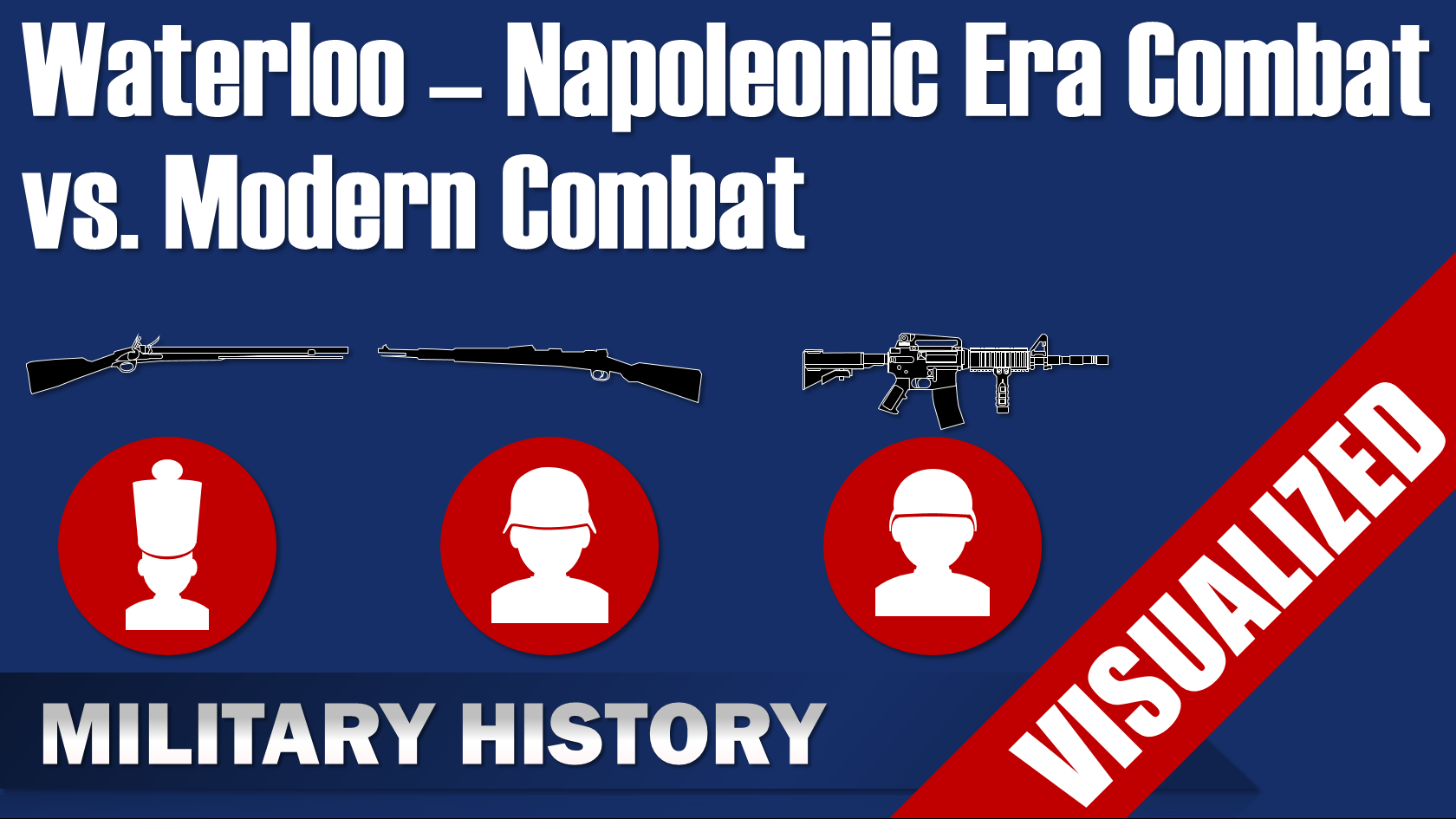 The realities of Napoleonic infantry combat were very different from that of the World Wars and especially contemporary combat. This video takes a look at the weapons, basic principles and other important factors from that era. In order to provide a more relatable and vivid impression I will use references to modern weapons and combat.

First off, the weapons, the infantry weapon of the Napoleonic era was the musket. Now a musket is not a rifle, a musket uses a smooth bore barrel, whereas a rifle has a barrel with spiraled groove, which is also called rifling. This spiral gives the projectile a spin that increases its stability and accuracy. Although the rifle is more accurate due to nature of its barrel it took longer to reload and was more complicated.

Now, the standard muskets at the Battle of Waterloo were usually muskets from the 18th century in slightly improved version. So let’s take a look at them and how they influenced combat and doctrine.

The British used mostly the Land Musket, which is better known as the Brown Bess. Its weight was 4.8 kg with a length of 1.49 m and a caliber of 19.3 mm (0.75 in).
The Prussians had a newer musket yet in low numbers, I provide it mostly for reference, since the Prussian troops at Waterloo used a variety of looted weapons and the older Prussian Potsdam Musket (1723 / M1723/M1740).

The muzzle velocities of all these muskets was around 300 m / second (1000 ft / second), but take this value with a grain of salt. (The weight of the musket balls was around 20 to 30 gram. Since the infantry carried around 50 to 60 shots, this meant about 1 to 2kg of extra weight.)

As you can see there is only a slight difference between these weapons, but let’s take a look at two more modern weapons. First the German standard rifle for the Second World War the Karabiner 98 kurz.

Weapons and their influence on combat

First off, men in the Napoleonic era were usually smaller and had less weight, thus the weight of the gun in combination with the longer length had a more tiring effect than for a “modern infantry man”. A British male in the first half of the 19th century with an age of around 30, had an average weight of about 58.5 kg ( lbs). Thus the Brown Bess was about 8.2 % of his body weight. (British men, Birth Cohort: 1800-1819; Age 26-30; 58.50 (see Table 4) source )

The average German male in 2005 weighed 82.4 kg ( lbs), thus the Brown Bess would only be about 5.2 % of his body weight. This difference doesn’t seem much, but you need to take into account a prolonged engagement which usually followed after a longer period of marching or maneuvering. It all adds up, especially if you try to aim that weapon and hold it steadily. Furthermore, reloading in the Napoleonic era took several complicated steps that required to lower the weapon. Together, the physical strain on a Napoleonic soldier just for aiming, firing and reloading his weapon was far more tiring than for an infantry man in the World Wars or in a contemporary conflict. ( Source )

The difference in Muzzle Velocity and Caliber

Next, the difference in Muzzle velocity and Caliber resulted in different kinds of wounds. First off, the larger caliber meant that the damaged area was larger, also the projectile was a ball and not a shaped bullet. In combination with the increased muzzle velocity that means that modern bullets usually pass through their targets and most other stuff like wood and car doors, unless you are acting in a Hollywood movie. Quite contrary to a musket ball, which usually stuck when it hit its target. The combination of larger wounds, stuck projectiles and the poor state of medicine meant that limb damage often resulted in amputations and other wounds were usually deadly in one way or another.
Let’s take a look at the overall accuracy of the Muskets.