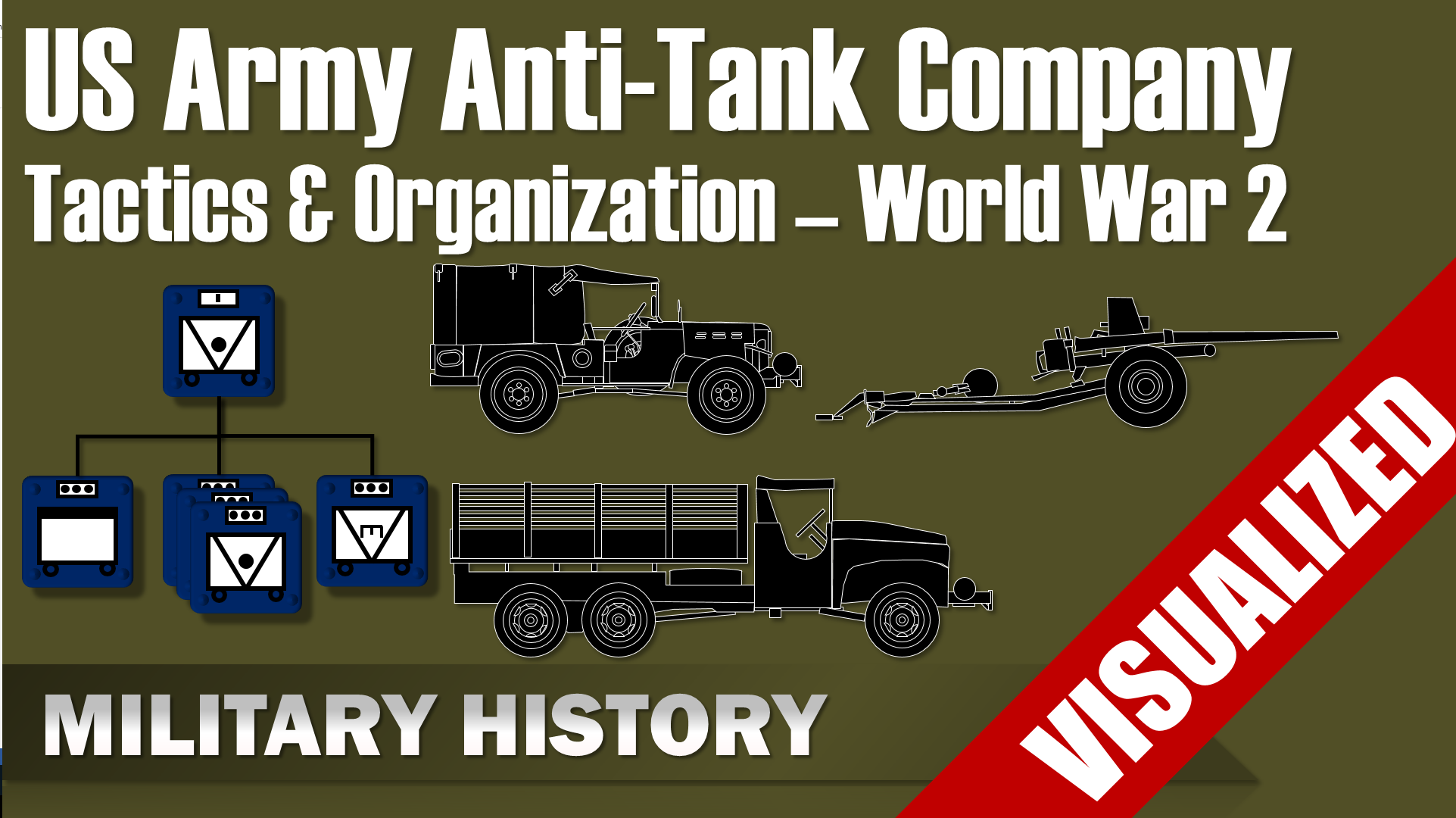 Time to cover anti-tank tactics and principles, for this I took a look at the War Departments Field Manual 7-35 from March 1944 that covers the anti-tank company and other anti-tank units in an US Army Infantry Regiment. So let’s examine the company before we dive into the overall defensive setup, tactics and how to properly deploy a defensive position with anti-tank mines.
So let’s get started.

Relationship to Regiment and Battalions

Note that the anti-tank company was part of the infantry regiment, which also consisted of 3 infantry battalions, which themselves had their organic anti-tank units, namely an anti-tank platoon each.

Now, these battalions had all their own assigned areas to defend, which were themselves located in the regimental zone. Thus, regimental anti-tank company was used to support the anti-tank units of the battalions. (FM-7-35 March 1944: p.92-93)

As stated in the field Manual:
“Frequently, one platoon of the regimental antitank company is employed to reinforce or add depth to the antimechanized defenses of each front-line battalion, and provide protection to its flanks (see fig. 12).” (FM-7-35 March 1944: p.93)

Hence, the main function of the anti-tank company was to provide protection against enemy tanks in coordination with the battalion’s anti-tank platoons. To achieve this, the primary missions were reinforcing the front-line battalions to deepen the anti-mechanized defense and to protect the flank or rear of the regiment. Secondary missions were attacking enemy observation posts, fortifications, gun emplacements or other enemy positions. Note that if during a secondary mission a primary mission appeared the anti-tank units should switch without order to the primary mission, meaning engaging enemy armored and mechanized troops. (FM-7-35 March 1944: p.13-14)

Additionally there should be cover positions near the firing positions, to provide protection for personnel and equipment not engaged with the enemy. (FM-7-35 March 1944: p. 16)

The usual construction order is to first build the primary emplacements, then followed by the alternate positions for these and then the supplementary emplacements and their alternates. (FM-7-35 March 1944: p. 101) Additionally, dummy position should be constructed, these should be located at least 140 meters away from any true position. (FM-7-35 March 1944: p. 154-155)

Now, if you should ever setup an anti-tank position on your property or somewhere else, the manual contained two interesting bits that grasped my attention. First off, during the excavation of the position you should employ a camouflage net to avoid detection from the air. But as always the devil is in the details, when you use a camo net, be sure that it touches the ground everywhere, because if it doesn’t, it will throw a large shadow that makes it quite visible from the air. (FM-7-35 March 1944: p. 243) And second, after firing your gun several times, you should consider removing the blast marks in front of your gun. (FM-7-35 March 1944: p. 247)

Now, for better coordination and organization, usually each unit was assigned a sector of responsibility, the size was dependent on the terrain, visibility and proximity of additional units. Ideally, these sectors should overlap with the sectors of adjacent units. The unit leader was responsible for observing the assigned areas. (FM-7-35 March 1944: p. 124)
In order to provide effective fire and prevent giving away the positions too early, there were several rules in place. First the unit leader defined the ranges at which enemy vehicles should be engaged. (FM-7-35 March 1944: p. 124-125) Second, approaching hostile recon and decoy vehicles should not be fired upon, unless the superior commander ordered this explicitly, e.g., for an anti-tank platoon the company commander and if the platoon was attached to a battalion the battalion commander. (FM-7-35 March 1944: p. 124-125) This prevented giving away the positions of the guns prematurely and furthermore, the enemy should be engaged when he had committed his main force.
In order to provide proper ranges, the squad leader for each gun was responsible creating a reference sheet, which he also copied for the platoon leader. (FM-7-35 March 1944: p. 160-161) Let’s take a short look at an adapted version of such a range card contained in the field manual.
Now, such a reference sheet was rather simple, it contained the position of the gun. An indicator for the magnetic north and various reference points with names and distance from the gun.

Let’s take a closer look at the defensive organization and tactics of the anti-tank units. The field manual has a quite interesting view on defensive combat stated under the point “defensive doctrines”:
“The general object of defensive combat is to gain time pending the development of more favorable conditions for undertaking the offensive, or to economize forces on one front for the purpose of concentrating superior forces for a decision elsewhere.” (FM-7-35 March 1944: p. 91-92)

As you can clearly see, the defense is seen as a temporary situation until an offensive is possible or as a deliberate action in one area to provide the necessary forces for an attack in another area. Thus, on a strategic scale an offensive stance seems to be the determining factor.
“72. MISSION. The principal mission of the antitank company of a regiment defending a sector of the battle
position is to reinforce or add depth to the antimechanized defense provided by the organic antitank weapons
of front-line battalions, and to protect the flanks, and, if necessary, the rear, of the regimental sector.”
(FM-7-35 March 1944: p. 92)

Now, one element in discussions about anti-tank operations that is often commonly neglected is the usage of mines. In defending an area against tanks mines can play a crucial part. Yet, mines are often misunderstood, the most important thing about mines is that they are first and foremost an area-denial weapon. This means, the enemy should be discouraged to use the mined areas and thus divert his approach into an area that is chosen by the defending side, which should allow an effective usage of the anti-tank guns and other weapons. (FM-7-35 March 1944: p.93)
Now, minefields don’t stop a professional army. The manual stated that mine fields must be laid in small arms range (50 to 450 meters) of an organized position. Furthermore:
“A mine field must be defended by fire to be effective. Undefended mine fields delay the enemy only for the relatively short time it takes to bypass them or to remove enough mines to permit passage.” (FM-7-35 March 1944: p. 176)

Additionally, there should be a certain safe distance between friendly position and mine fields, furthermore they should not be laid in areas that are assigned for defensive artillery fire. (FM-7-35 March 1944: p.96)

Besides funneling an enemy attack into certain areas, mines could also be used to increase the resistance of outpost, by properly mining the approaches of an outpost the defending units could withdraw and lower the chances of being overrun.
Furthermore, in case of an enemy break through, a properly mined regimental sector would prevent the enemy tanks from moving freely and thus denying them to fully exploit their advantage. (FM-7-35 March 1944: p.95)

Example of a position with road block and mines

Let’s take a look an example position from the manual that uses mines and roadblocks to defend an area.
The road block is covered by the gun and also small-arms fire from infantry. The gun is positioned that it can cover the road and other approaches suitable for tanks. The mines are in range of small arms fire to prevent their removal, furthermore the infantry also protects the gun from enemy infantry. Additionally, rocket teams nearby provide additional protection from attacks on the flanks and rear. (FM-7-35 March 1944: p. 180)
Furthermore, if during an attack a tank comes within or below a range of 270m, all personnel not serving the gun or already attacking enemy foot troops, should employ rockets or other weapons against the enemy tanks. (FM-7-35 March 1944: p. 27)
The manual states: “Doors and turrets, if open, offer particularly favorable targets to small-arms fire, as do also vision slits and periscopes. Should tanks succeed in approaching close enough to warrant such action, incendiary grenades, antitank bombs, and smoke grenades may be used. Fire is continued until defenders are forced to take cover to avoid the crushing action of tanks.” (FM-7-35 March 1944: p. 27)

To summarize, each battalion defended its sectors with their organic anti-tank defenses, whereas the regimental anti-tank company provided additional protection on the flanks and/or in the depth.
The use of anti-tank mines, natural and artificial obstacles was central in setting up a proper defense. In case of an enemy attack, it was important to wait until the enemy committed its main force. Additionally, firing at lone recon vehicles was performed only in accordance with the commander the anti-tank unit was attached to. These measures ensured that the positions weren’t given away prematurely and that the maximum firepower could be used once the enemy reached an effective firing range.