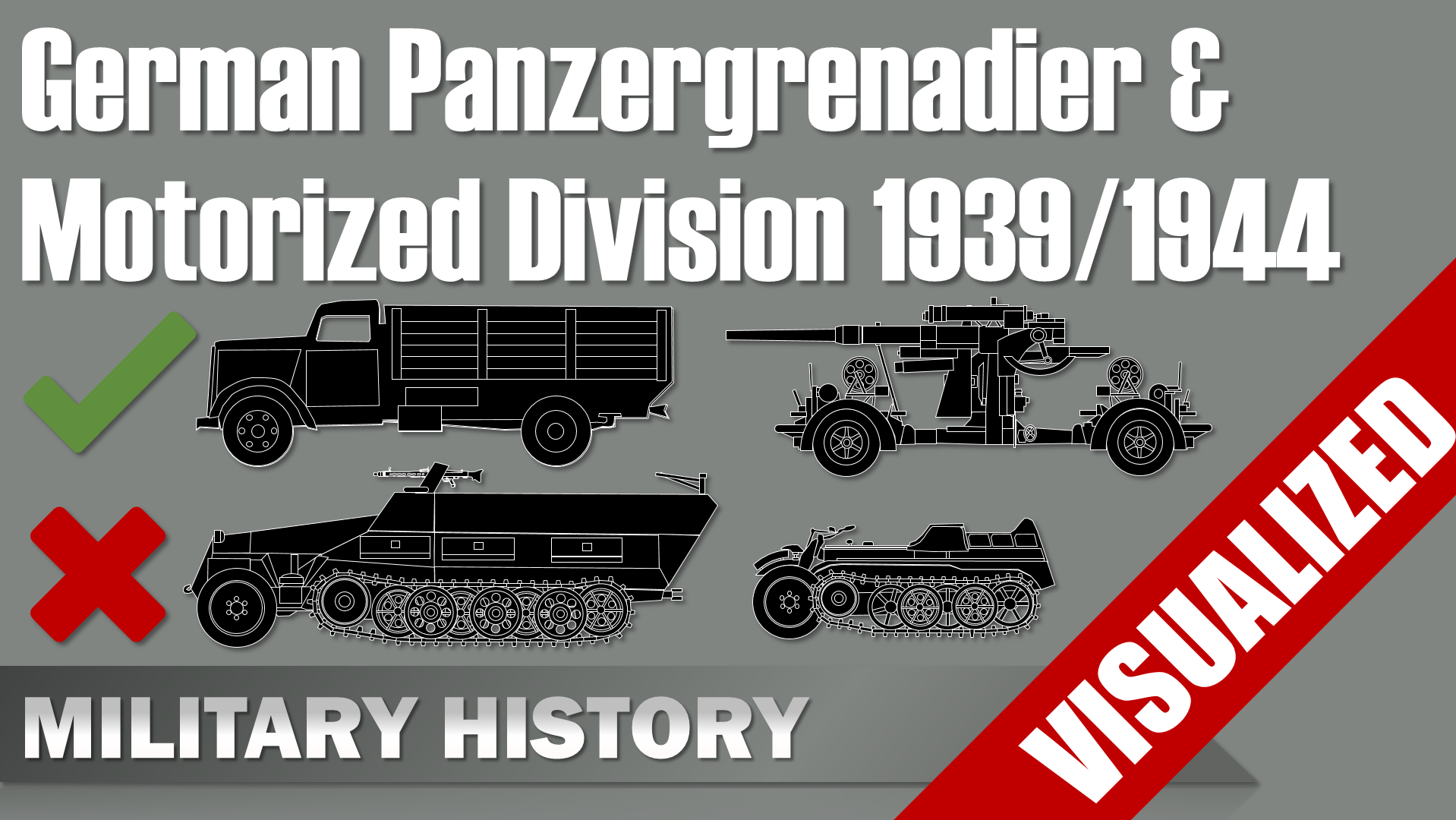 So, let’s start with the motorized division.

The main rear services consisted of a supply and transportation unit, administration and medical services.

Now, let’s take a look at the numbers and try to keep the organization in view. Note that these numbers are for single individual sub-units, hence the numbers displayed won’t always add up, because in some cases they need to be multiplied. Also platoons and even smaller sub-units are not visible.
For the Recon Battalion we have around 386 men, one infantry regiment had a total of 3106 men, the anti-tank battalion had 708 men, the Engineer Battalion 831 men, the artillery regiment 2837 men, the signal battalion 424.

After the campaign in Poland and before the battle of France the Motorized Infantry division were slightly changed. Each Division was reduced by one motorized infantry regiment and one light field Artillery Battalion. (Keilig, Wolf: Das deutsche Heer 1939-1945 Gliederung. Bl. 102 – I- 5)
Now, since we know how an early war motorized infantry division looked like, let’s take a look at the last official organization of this unit type in 1944, the Panzergrenadier-Division 44.

Now the name can be quite misleading, because usually when somebody mentions the word Panzergrenadier they show either a picture or video footage of soldiers in or next to German halftrack. Yet, the reality was quite different than propaganda footage.

Even in late war the basic layout of the Panzergrenadier Division 44 was using only trucks and no halftracks for the infantry units. After all, there were only 7 armored halftracks assigned to the whole division.

For the non-combat units there were 667 men in the supply units, 233 in the administration units 530 men in the medical units, 973 men in the reserve/replacement battalion and 281 men in the maintenance unit.

In total the division consisted of 14732 men, with 402 officers, 83 officials, 2766 NCOs, 11487 enlisted men and 690 volunteers. Note that these volunteers were part of the official layout of the division not some ad-hoc addition on the front line.

So let’s compare these two units. I won’t cover all changes, because some are quite obvious, like minor replacements, but there were quite some major changes in organization, equipment and the overall numbers.

First in terms of organization, both divisions had a recon layout, but internally the changes were quite significant. The 1939 version consisted of a company of motorcycles and an armored car company with 10 armored cars. Whereas the 1944 version had a headquarters company with 17 or 20 armored cars depending on the layout. Additionally, 3 companies of light motorized infantry with the same amount of weapons each like the motor cycle company and also a heavy company that doubled the amount of mortars. Hence, both the numbers in equipment and manpower was quite different. The 1939 version had 386 men, whereas the 1944 version had 1005 men.

Let’s take a look at the anti-tank units. The 1939 version had only towed equipment available and the main force was located in 3 anti-tank companies, whereas the 1944 version had only one company of towed anti-tank guns, yet 2 companies with tank destroyers. Note that the early war anti-tank guns could be moved by infantry tactically, this wasn’t possible with the 75mm guns anymore, thus the introduction of tank destroyers was a necessity to provide mobile anti-tank capabilities on the tactical level. (Wettstein, Adrian: Stumartillerie)

The engineer battalion stayed almost the same both in numbers and equipment.

The Artillery unit had two changes, the minor change was one light artillery battalion less, but the total number of guns was the same, hence this was mainly a change in the overall structure. The original setup had artillery observation battalion. This unit was assigned to the Army units and removed from the division after the Polish campaign. (Keilig, Wolf: Das deutsche Heer 1939-1945 Gliederung. Bl. 102 – I- 2)

In terms of anti-aircraft units there was a major change, in 1939 only one company with 12 small anti-aircraft guns was available, the heavy MG company. In 1944 this setup had changed significantly, there was a dedicated army anti-aircraft battalion with a heavy company and an additional light or medium company, depending on the setup.

This assault gun battalion, was a major change. Whereas in 1939 there were only 24 light infantry guns available, in 1944 this number had changed to 8 heavy infantry guns, but an addition of 42 assault guns clearly increased the amount of high caliber direct fire weapons to support the infantry in combat.

There are quite many other changes, the number of supply companies in individual units increased, furthermore maintenance and other units were added also, which is a direct result of the increased amount of tracked vehicles most notably the tank destroyers and assault guns.

Now, to wrap this up, a short comparison in the equipment numbers, I choose various numbers that changed considerably and also show the evolution of certain areas.
In 1939 there were a mere 31 sub-machine guns assigned to the Division, in 1944 this number increased to 1230. In terms of light machine guns the number almost doubled from 374 machine guns or should I say Spandaus to 732 light machine guns. In terms of anti-aircraft guns there was a increase from 12 light anti-aircraft guns to 63 light and 12 heavy anti-aircraft guns. There was also some reduction in equipment numbers, the 1939 division had 1323 motorcycles, whereas the 1944 layout had only 153 assigned. Yet, in 1944 the division had 322 Kettenkräder, which is basically a half-tracked motor-cycle. In terms of anti-tank capabilities the original setup had 72 anti-tank guns, whereas the 1944 had only 19 anti-tank guns of a higher caliber, since now 31 tank destroyers were used in the anti-tank role. And an additional 42 assault guns that could be used similarly.

To summarize the biggest differences were in terms of equipment were the reduction of the number of motorcycles. The vast increase in anti-aircraft weaponry, the addition of assault guns and the change of most of the anti-tank capability from towed anti-tank guns to tank destroyer.

Now, for all those waiting for the division layouts for Hearts of Iron IV, don’t worry, I didn’t forget you guys. There will be an update video shortly on the infantry divisions and probably one for the units mentioned in this video too.